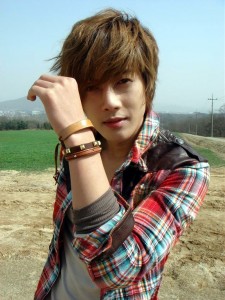 As Amy pointed out in our latest Sunday Social, 2014 hasn’t been the most peaceful year; however, things have taken a very dark turn after the news that SS501 member, actor and all-round Hallyu star Kim Hyun-joong had been charged with domestic abuse.

On the 20th of August, Kim’s heretofore secret girlfriend of two years filed a lawsuit against the star, claiming that she had been beaten by him multiple times between May and July this year. Their confrontations, alleged to be over Kim potentially cheating on her, left the girlfriend bruised, and, after one incident in July, in hospital with broken ribs. The girlfriend, dubbed “A,”  is said to have produced both medical records and proof of her relationship with Kim when filing charges.

As the horrible news was splashed across news pages on the 22nd, Kim Hyun-joong’s camp stayed quiet, merely saying that they would cooperate with police. On the 23rd, though, Keyeast Entertainment released an official statement saying that:

With this statement, Kim Hyun-joong’s camp sought to dismiss various claims that had been made when the news first came out: 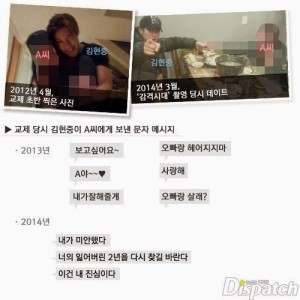 Unfortunately for Kim — and fortunately for the good of society — the public wasn’t buying what the statement was selling, and saw it for what it truly was: the minimising of the fact that Kim Hyun-joong had, in fact, abused his girlfriend. The fact that admitting to one instance of violence was the best defence Kim’s camp could give is enough to show how indefensible his actions are.

And to make them even more indefensible, proof supporting A’s claims of multiple assaults has surfaced via Dispatch, who revealed text conversations between the two dating back to 2013, as well as a photo of them together in 2012 and Kim’s own text to A saying “I hope you can get your lost two years back,” disproving Keyeast’s claim of the relationship lasting only a few months.

More important than this revelation about the length of the relationship, however, are the contents of the rest of the text messages. In one exchange, taking place the morning of a Japanese fanmeet for Kim:

A: I have bruises all over my body. It hurts. I have no reason to be beaten. 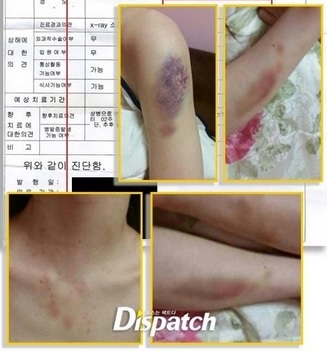 Dispatch have also pointed out that Kim Hyun-joong didn’t have any visible signs of bruising, thus casting doubt on his agency’s claim that the fight was not one-sided. A text sent by A to her friend was also part of Dispatch’s release, relaying A’s physical pain after another fight with Kim where her ribs hurt so much she couldn’t lay on her side. This also disproved Keyeast’s statement that A didn’t feel anything after her ribs cracked. And if that isn’t enough proof, Dispatch today released images of the injuries sustained by A.

Personally, I don’t like the idea of private communication and personal information made public like this, especially by a third party like Dispatch, even in cases as extreme as this. The matter has been reported to the police, and it is up to the legal system to fulfil its duty and make sure that justice is served; the public is free to judge Kim Hyun-joong, but prosecuting him is a job for the courts.

That said, the justice system has to do its job properly, first. Another revelation today is that Seoul police have summoned Kim for questioning … in early September. This gives Kim more than enough time to prepare for and perform at his next concert in Guangzhou, China, on the 30th. After all, he’s going to need to fund the settlement payment to A that his camp will definitely try to make happen before the case can be taken to court. And then, he will simply sprinkle some of the magic fairy dust known as enlistment, and then lie low until the public forgets about it. And even outside of South Korea it isn’t any different. There are a number of male celebrities who have continued to get work, like Hollywood’s Josh Brolin and Sean Penn, among others.

Then we come to the stigma surrounding domestic abuse itself. Offensive violence against anyone (or anything) is not be acceptable, but domestic violence is especially terrifying because it takes place at home, the place where you are meant to feel safest, and perpetrated by those who are meant to love and care for you. Domestic violence (Intimate Partner Violence in particular) is used by one person in a relationship to control and subjugate the other. It can be emotional, psychological, sexual or financial, but physical abuse, also called battery, is the most widely recognised form. Domestic violence isn’t the result of mental illness, or drug or alcohol abuse, though they do exacerbate it.

I have been very fortunate to have never experienced domestic violence personally, but that doesn’t mean I never will. And that is true for all of us, regardless of age, ethnicity and gender identity. Men are victims of domestic violence perpetrated by women, and it occurs in same-sex relationships as well.

Domestic abuse perpetrated by men towards women is no more or less important than the other types already mentioned in and of itself, but it is part of the greater oppression of women in patriarchal societies. As women are considered the “typical” victim of domestic abuse, the issue does not garner enough serious attention, and as a result other victims become invisible as well. In addition, there is also the issue of men generally (though not always) being more physically stronger than women; it would have taken a lot more for A to have inflicted the same amount of damage to Kim than he did to her. 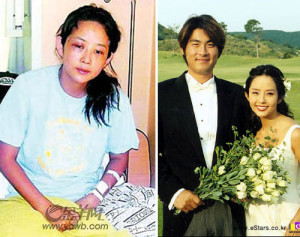 We see so many instances of violence against women blamed on the victims themselves, and domestic violence is no exception. A famous example of this involved actress Choi Jin-sil. Whilst going through her divorce in August 2004, she was beaten by her estranged husband, baseball player Jo Sung-min. Cho, like Kim Hyun-joong’s agency, told the media that it was a fair fight, because of course a slim actress would be an equal match to a professional sportsman. In response, Choi released pictures of her injured face to the public.

That action led her to being sued by one of her endorsers, Shinhan Engineering and Construction. The company argued that Choi had breached her contract because her actions — that is, making the fact that she had been a victim of domestic abuse public — had reflected badly upon the “moral and social reputation” of the company. Because, as in many nations, domestic abuse was (and still is) seen as a family matter, Choi was regarded unfavourably for bothering everyone by making her private affairs public.

Choi was initially ordered to pay the company, but successfully appealed in the high court. However, Shinhan took the matter to the Supreme Court in 2009, which overturned the high court’s ruling, and in doing so echoed the company’s words that Choi — who had committed suicide in 2008 — was responsible due to the lack of “honour” in her actions.

The attitude towards domestic violence may have improved since 2009 — In 2012, there was a reported 30% increase of arrests relating to domestic violence, at 8,762 — but the problem still remains: the reported number of incidents in 2012 was 118,718. South Korean police have also been given powers to enter homes in suspected cases of domestic abuse, and there has been discussion on a three strike policy to curb re-offending and greater use of professional counsellors to offer support. But there is still a long way to go, especially if high-profile cases like this one do not lead to justice being served. 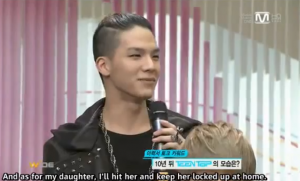 As said above, drugs, alcohol and mental illness do not cause domestic abuse. One thing that does, though, is our perception of domestic violence as shaped through experience and observation. Normalising domestic violence, or not treating it as the serious and damaging social problem it is means a greater chance that others will normalise it as well, which only makes it harder to eradicate.

We should speak up and have our condemnation of domestic violence, and support for victims, known, and not just only when incidents like these happen. We shouldn’t have to wait until a woman is harmed to talk about this; these conversations should take place more often, even when it’s “just a joke” like a guy saying he would beat his future daughter or talking about taking to his coordi with a hammer. The fact that “jokes” like this can even be said goes to show how far society has to go in this regard. We all owe it to society, and ourselves, to speak up and speak out about domestic violence and the harm it causes.

The above is but a brief overview of the massive issue of domestic violence. You can begin to learn more about it here. For those seeking hep, many countries have hotlines dedicated to women, children and men for help with this issue, and you are encouraged to contact them if you are or someone you know is in a situation involving domestic violence. There is also a lot of on-line help available if calling makes you feel unsafe, with ‘escape’ buttons to use if needed. 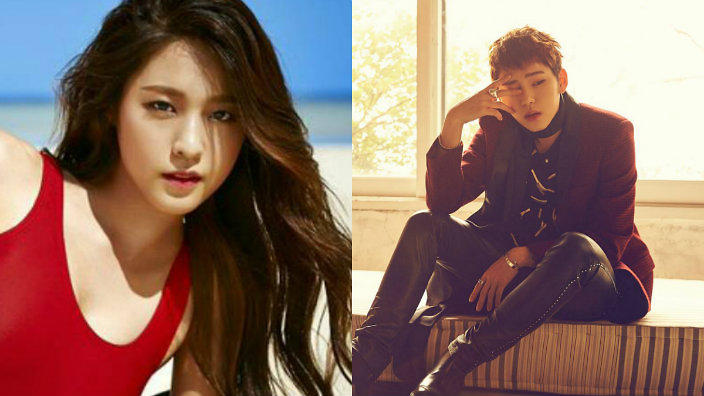