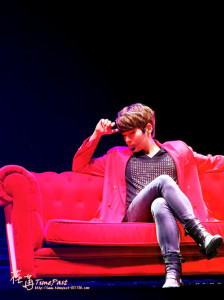 I’ve heard many a jaded K-pop fan say that the appeal of K-pop primarily lies in the idols, not the music. I’m approaching my sixth year of K-pop fandom, and after spending so much time wading through K-pop singles like I’m at a Kohls clearance rack on a never-ending Black Friday, I think it’s about time for me to embrace the fact that K-pop is nothing without its seemingly endless spawn of ineffably good-looking, impossibly well-mannered, varyingly talented idols.

But this is far from a bad thing; despite all this jaded talk, K-pop is still chock full of talented folks who deserve admiration and praise for their skills as performers. It’s a pity that most hit K-pop singles don’t leave much room for idols to show off their uniqueness as performers. Amidst repetitive hooks, high notes, and “rapping,” K-pop idols are rarely given songs that fit their voice, leaving audiences to make judgments on an idol’s vocal skills without ever really hearing them perform at their best.

The one exception is in cover performances. Unfortunately, K-pop idols also tend to be notoriously awful at picking out popular songs to cover — for instance, Sohee‘s “Single Ladies,” Minho‘s “If U Leave,” and almost everything that Key has ever covered.

Over the five years I’ve spent in K-pop, I’ve made something of a game out of picking non-K-pop songs that might fit the voices of certain K-pop idols. The game becomes particularly interesting when pairing songs with idols who have unique voices and/or are “bad singers,” because it’s no fun to find songs for skilled singers that sound good on virtually anything.

Here are 11 English songs that K-pop idols should consider before reaching for that “Moves Like Jagger” backtrack again.

It’s high time for Exo’s vocal line to step away from all those predictable R&B ballads. This B-side from Maroon 5’s Overexposed album isn’t necessarily a challenging song to sing — no 8-bar riffs here — but it has a great beat and punchy vocal line that the Exo trio would pull off flawlessly even while running wild all over the stage.

Picking a song for Hyorin is basically cheating because she would probably sound good singing “Yankee Doodle,” but there aren’t a lot of female idols who could pull off Ariana Grande, Top 40’s current It Girl. While Hyorin’s voice doesn’t have Ariana’s delicate girlish lilt, the key to this song lies in an effortless delivery, and Hyorin is more than skilled enough to carry this song and have fun while doing it.

And though having hard-and-heavy Junhyung perform in a fluffy pop song might not seem all that intuitive, it would offer him a rare opportunity to soften his image while being all flirty with Hyorin. You’re welcome, fangirls.

First, listen to this performance of “Passionate Goodbye.” Then listen to this song. And you will realize why Onew will probably be the only idol in history to pull off Billy Joel without it being weird.

For the 2024 Wonder Girls reunion tour. Start stocking up on Kleenex now.

Call me sadistic, but I’m itching to hear Kevin sing something sad. Not the kind of angsty, tear-my-clothes-off-because-heartbreak-makes-me-really-horny sadness, but something a little more, ehm, reverent. He did a surprisingly good cover of “More Than Words” a little while back; it’d be nice to hear him singing more songs with the same feel. Seeing a K-pop idol connect with the contemplative lyrics of “A Team” would be really refreshing, too.

Jonghyun’s another cheat case because, like Hyorin, he also sounds good on almost anything — but if he were to cover this song, I would probably cry for days. It’s a drastic change in style from his usual screamtastic high notes, but throughout the six years of his career, Jonghyun’s shown a couple of glimpses into his flair for acoustic music — and they looked good. This song came to mind because Tracy Chapman’s voice has that same break-y, agile quality as Jonghyun’s voice when he’s singing in the middle of his range. Jonghyun, though, would most likely put his own spin on the song — maybe even write a Korean version of the lyrics? So much potential!

Okay, stay with me on this one.

I have this awful habit of stanning the worst singers in K-pop, and so I can’t help but feel a twinge of sympathy whenever idols with bad voices tackle overambitious songs and butcher them. For these unlucky idols, the key to a successful solo cover lies in convincing your audience that you’re in full control of your performance. Picking hard songs that require a lot of concentration to pull off tends to ruin this act.

“Burning in the Skies” is probably the easiest song to sing on this list; it probably has a total of five different notes in it. Which works out perfectly when your range is only five notes wide. Taecyeon and Nichkhun’s voices are just fine and sound quite nice, but only when paired with a song that doesn’t require them to push themselves beyond their technical abilities. Add to that the angst and drama of the song (because why expect anything less from Linkin Park), and you’ve got the ingredients to a concert-ready cover performance that is vocally simple enough for Taecyeon and Nichkhun to work to its full potential — you know, lasers lights, punk rock t-shirts, a full band in the back, and enough close-up shots of Taec and Khun looking stoically unemotional to have the fangirls wetting their panties for a week.

Forget for a moment that Key and Minho can’t actually rap, because this is purely a production number. No more of that cracktastic 3oh!3 nonsense that Key and Krystal pulled two SMTown concert tours ago, and no more cute little Disney Channel duets for Luna. There’s so much potential in this song for some great choreography, killer staging, and most importantly — male-female idol interaction that extends beyond wholesome hand-holding. Cha-ching.

I’ve always thought that this song was really Infinite-esque in a mellowed-out, pre-pop electronica kind of way. It’s always nice to see an idol married to boring, weepy ballads try something a little more soulful and energetic.

Because I mean, who hasn’t been itching for these two to do a proper duet? The fact that they have natural chemistry is a given — anyone who manages to promote “1-4-3 (I Love You)” for an entire month together without killing each other should automatically be granted a marriage certificate — but they’ve yet to perform anything that works that chemistry to its potential.

This song needs just one thing in order for it to work: heart. Amber and Henry’s voices have a similar earnest, unpolished sound to them, but their vocal technique is solid enough to pull off a clean performance. What’s left is an honest conversation between two people; a performance that’s less about impressing an audience and more about two friends making music together.

If you can think of a potential cover song that beats Kyuhyun getting #crunk, leave it in the comments below.