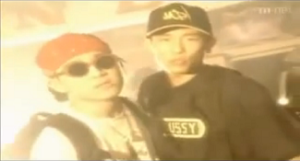 Song covers can be hits or misses. Very often the cover is considered worthwhile if it does not deviate much from the original source content. In K-pop, the idols give reverence back to the older generations with their covers. Many recreate and attempt to match the original vocal styling, but my favorite covers are the ones attempt to add extra flair to the original versions.

Recently, Vixx and Double Kick joined forces to pay tribute to the hip hop group, Deux. Deux was an active hip hop duo in the 1990s whose debut song “Turn Around and Look at Me” helped to establish them as leaders in the K-pop movement. The song originally had a heavier focus on the rap portions and a new jack swing sound popular during those times.

Vixx and Double Kick definitely added a new contemporary element to the mix. They rearranged the song, adding a rap by Ravi at the beginning to preface it as a tribute to Deux. More synths and a trap-like beat are layered over the original song base to make it feel almost reminiscent of more recent Vixx songs. Overall, the cover is successful in giving the song a fresh 2014 reboot in what is the 20th anniversary for Deux.

About 7 years ago, Big Bang also covered an older generation idol song with their release, “Crazy Dog.” Lauded by many as the first group to successfully launch K-pop into the limelight, Seo Taiji & Boys first gained popularity through bringing a new type of sound to the Korean music scene in the early 1990s. Their influence is undoubtedly something that reverberates in the K-pop scene even today. On their debut album, one of the tracks “You, In the Fantasy” became the inspiration for Big Bang’s “Crazy Dog.”

Sampling off the beat and taking liberty with verses, “Crazy Dog” is certainly an inspired revamp of the original Seo Taiji & Boys song. Heavier electronic elements are present in Big Bang’s song helping to make it a crowd pleasing, high energy song. Also, T.O.P and G-Dragon bring their distinctive rap styles to “Crazy Dog,” making this song feel less like a cover than a Big Bang original.

Lastly, I wanted to highlight Girls’ Generation. The song and name of the popular girl group were inspired by Lee Seung-chul’s 1989 song of the same name. Lee Seung-chul’s “Girls’ Generation” was a rock ballad infused with a unique keyboard riff. He had a very emotional and soulful delivery providing the song lyrics with an added depth of vocal character.

The 2007 Girls’ Generation version is notable because it features 9 female vocals and a higher BPM. The song can noticeably be linked to the original, maintaining much of the melody. However, the cover is special because it adds the Girl’s Generation conceptual style during their debut era. It adds a cuter, aegyo style intermixed with their multiple harmonized vocals. Taeyeon and Jessica both take on the climax of the song’s ending, allowing their vocals to relish a high key. The performance is also noteworthy for attempting to link the original Lee Seung-chul band image with the pop dance performance Girls’ Generation are known for.

Covers are often meant to pay reverence by sticking completely to the original sound, lyrics, and melodies. The ones that interest me are the ones which add the contemporaneous styles of the artists who are covering the older generation. The reverence for the original performers remains in keeping some similar elements, but the song can have much more uniqueness and energy by adding newer features into the mix. What older generational covers do you find most interesting and worthwhile?