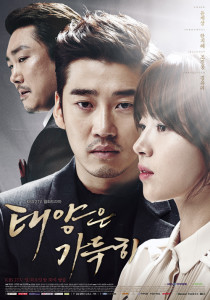 Full Sun, also known as Beyond the Clouds, began airing on February 17th on KBS 2TV; it replaced the slot formerly filled by Prime Minister and I and received rather low ratings that have picked up as of the fourth episode. Starring Yoon Kye-sang and Han Ji-hye, Full Sun is a somber melodrama that combines elements of revenge narratives, heist and con man films, and romance into every action-packed hour.

As the series begins, Jung Se-ro (Yoon Kye-sang), a man of such humble origins that he has to borrow a suit for an interview, is working hard to raise his social standing, while Han Young-won (Han Ji-hye) works on her jewelry business, Belle la Fair, and spends time with her newly minted fiance, Gong Woo-jin (Song Jong-ho), another man of humble origins who works for her business.

Their storylines converge in Thailand at a jewelry convention, where Woo-jin is murdered by an unknown sniper, and Se-ro’s father (Lee Dae-yon), a deeply criminal smuggler who robbed Belle la Fair, is killed in a traffic accident. Se-ro is mistakenly sentenced to prison for Woo-jin’s murder, while Young-won is left to pick up the pieces of her shattered life.

The story resumes five years later upon Se-ro’s release from prison; much changed and assuming the pseudonym Lee Eun-su, he has vowed to take down Belle la Fair and Young-won, who he mistakenly believes framed him for the murder. Young-won has not recovered from the loss of Woo-jin, keeping his old office preserved exactly as it was the day he died, despite her uncaring father (Kim Young-chul)’s protests. As for Se-ro, with the help of his father’s old criminal friends Park Kang-jae (Cho Jin-woong) and Seo Jae-in (Kim Yoo-ri), he begins to infiltrates Young-won’s business in order to carry out his intricately plotted revenge, though he finds it difficult to reconcile Young-won, the pleasant young woman he meets, with the image he has in his head of the evil person who framed him.

While the acting is generally good, the writing still has work to do on the characters. There’s a fine line between a brooding anti-hero who acts like a jerk and just a plain jerk, and at times Se-ro crosses that line, which is dangerous because he’s not the villain, he’s the male romantic lead. I’m supposed to root for him, and yet I cannot connect with someone who is completely irrational and rude to everyone around him–even his co-workers and friends–in 85% of his scenes. In the other 15%, I do feel sorry for him, mostly due to Yoon Kye-sang’s amazing acting, but I’m not convinced that his pain and suffering justifies him trying to cause suffering to everyone around him. Meanwhile, Young-won’s storyline is shaped by the men in her life; her father secretly controls her business, she can’t get over her murdered fiancé, and Se-ro stalks and manipulates her into giving him a job. And if this series passes the Bechdel test, it’s due to the short conversations between Young-won and Min, her competent but two-dimensional manager, and even then they usually discuss Se-ro/Eun-su. I hope that in subsequent episodes, Young-won has storylines that emphasize her own agency and events that aren’t decided by male characters. 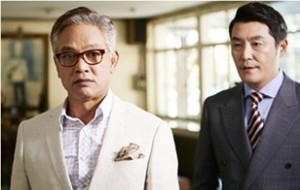 Most characters here are archetypal, but they are also flat: an evil step-mom (Jeon Mi-sun) who cares more about her biological child (Son Ho-jon) than Young-won, a villainous rich tycoon father, a pretty ingenue who falls in love with the brooding anti-hero, who will never reciprocate her feelings.  The reveal of Young-won’s father as Woo-jin’s murderer surprises no one. He even has the cartoonish evil villain laugh, which he executes with aplomb more and more frequently as the series progresses. So far, only Se-ro has character complexity, mostly through flashbacks to his childhood. I hope that more time is devoted to developing characters other than Se-ro, particularly Young-won and Jae-in, the aforementioned ingenue who deserves better character writing than the fail-safe of unrequited love.

In terms of plot, I think the quick and easy set-up of the first episode has harmed the development of the characters and the plot in subsequent episodes by not setting a complicated enough baseline prior to the 5-year flashforward. I wish that Se-ro and Young-won’s first meeting was actually something to be nostalgic about post-prison, rather than setting a precedent for Se-ro acting like a jerk to Young-won. At their first meeting, as she expertly wields a blowtorch on metal for jewelry, he decides the best way to offer help is to insult her: “You look like you’re not very good at it, you could get hurt.” The contrast between Se-ro before prison and after prison is not great enough; if he is unthoughtful beforehand and even worse after, then maybe all he needed was an excuse to hurt others. 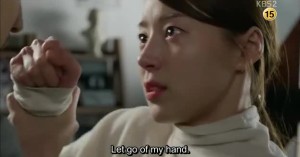 The romantic sub-plot also isn’t working, because I actually never want the two main characters to get together. I don’t think the star-crossed lovers tale works as well when Se-ro is literally Young-won’s stalker. Though he will eventually come to his senses and realize that Young-won is incredibly kind and never tried to frame him (for the murder of her own fiancé whom she loved deeply, keep in mind), it doesn’t take back the horrible things he did to her in these four episodes, which include but are not limited to: trashing her dead fiancé’s off-limits office and then demanding that she give the office to him (complete with him grabbing her arm against a wall!), intimidating her through stalking, ominous letters, and his physical presence, and giving her a huge fake diamond as a publicity stunt for her much-loved, growing business, which will ruin her business when the fake is revealed. I just don’t see how his change of heart will make up for the acts committed early on to the extent that she can forgive him and fall deeply in love, which is how the narrative usually goes. I’m not saying it won’t happen, but the writing and acting will need to be pretty spectacular for me to get behind it.

The acting of the two leads is one of the high points for me. Yoon Kye-sang as Se-ro absolutely slays the tough emotional demands of the third and fourth episodes, going from stone-faced to hysterically sad to murderous in a completely believable manner. When he’s angry and when he’s rude, I honestly feel scared of what he might do. Han Ji-hye as Young-won also emotes well enough, particularly in scenes of restrained emotion where her grief is understated and empathetic, though she has to reach more to show grand emotions of anger and sadness.

Dramas are never completely realistic, and so I could ignore the enormous gaps in plot and characterization if it resulted in a complex or engaging story. However, it is fairly simplistic thus far, which means that the holes in the characters’ logic (after five years focused on revenge, why didn’t Se-ro research the murdered man enough to know Woo-jin had been Young-won’s fiancé?)  stick out severely, leaving the actors to carry the illogical, impossible writing, which they do to the best of their abilities. It will be a difficult decision for me as to whether I keep watching; I think three male-on-female wrist grabs might be my limit. While the chase scenes are definitely fun and the actors show great range, a case of mistaken, hell-bent revenge barely supplanted by simple writing is not my idea of a good time.

(The Hathor Legacy, Images via KBS)