Another Parting Holds Your Heart Close 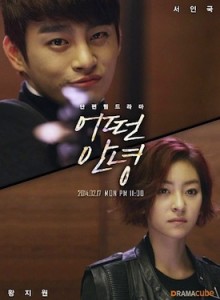 Warning: the following series will sucker-punch you right in the soul. Hard. Another Parting is a five-part web drama that provides an new twist on a classic story, while ripping the audiences’ hearts out at the same time.

Spoilers and a serious need for tissues ahead.

It stars Seo In-guk  as Hul, an alien sent to Earth with the mission of learning why earthlings cry. He is warned that he has twenty-four hours to accomplish his task, and if he does not take the red pill that will send him back in time, he will be forced to live on earth forever. Hul is also warned that this is a very precarious mission, with none before having ever succeeded. Most have simply vanished. There are a few wacky hijinks, but those end the instant he sees a sobbing woman, Hana (Wang Ji-won), about to jump off a bridge.

Hul manages to talk her off the ledge, with the agreement that she will explain about tears if he aids her in a goal: shooting her unfaithful ex-boyfriend and his new girlfriend. The two take off, and succeed in holding them and two others at gunpoint. In a rare moment of hilarity, it’s only when Hul is about to shoot Hana’s ex that our leading pair bother to exchange names. Hana ends up suffering a change of heart and flees with Hul, and the duo is chased around both by the police and Hana’s demons.

What follows is a tumultuous emotional ride as Hul and Hana forge an intense connection during their short time together. It’s not love, because they don’t have enough time for love. It’s a bond built on emotional extremes: Hul’s first exploration of feeling juxtaposed against Hana’s pain. She tells him about pain, regret, betrayal, and Hul explains about the nothingness that those on his planet feel. There is very little dialogue, which just serves to highten the raw emotions and emphasize how powerful Hul and Hana’s bond is, despite its newness. 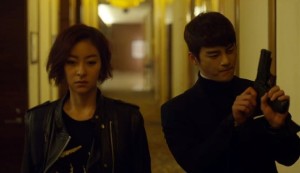 Seo In-guk and Wang Ji-won are in top form here. The two of them carry the entire 50-minute drama on their backs, and they are magnificent. Ji-won slays as the depressed, suicidal, and homicidal Hana. She perfectly captures someone who has rock bottom and doesn’t realize they’re done falling. She manages to switch from a zombie to a madman in half a second, without seeming over-the-top in the slightest.

Seo In-guk turns in a stellar performance as well. Hul’s adaptations to Earth are both instant and subtle. On one hand, he is seemingly childlike, ecstatic with all the shiny new toys around him. On the other, one can see as he considers the idea of not going back, slowly seeing Earth as new home instead of a prime assignment that will have to end.

Where the two really, shine, though, is when they’re not talking at all. Rarely is one actor so capable of portraying a character through body language that words seem unnecessary, let alone two. Yet when watching Seo In-guk and Wang Ji-won, the dialogue is rendered redundant. In fact, if this whole drama was made with no one talking, almost nothing would be lost.

The writing leaves me in two minds.  Plot-wise, it’s good, if a bit familiar. The idea of non-emotive aliens mixing with humans is not exactly new, but it does have a good twist in focusing on the sad emotions rather than more pleasant ones. It also has a ticking clock, and everybody loves a good ticking clock.  However, the dialogue tends to be uneven in spots, which is probably why the best scenes don’t have any. I appreciate that there’s not a lot time for pleasantries when you have 50 minutes to tell a story from start to finish, but there is time for subtlety. Every line of dialogue is awkwardly on point. No one ever gets sidetracked by anything, nothing gets said that doesn’t directly advance the plot. It’s like the writers don’t understand that there are more types of dialogue than “padding” and “nail on the head,” and I wish they could’ve realized that it’s okay to take slightly less direct routes to your goal. 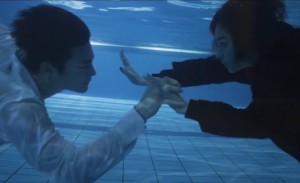 What really stands out above all is the theme. The whole point of this story is that “it’s better to hurt then to feel nothing.” As stated above, humans winning over emotionless aliens isn’t a new concept, but Another Parting presents it in a new, fresh way. Normally, the aliens are won over by the good stuff: love, lust, joy, curiosity, excitement, the things that humanity gorges itself on. Here, Hul doesn’t see much of that.

He sees and eventually feels the things we try to avoid: loneliness, betrayal, depression, worthlessness. He may get glimpses of happier feelings, but Hul spends the glut of his 24 hours up close and personal with the bottom of the emotional barrel. By the end, he still thinks that’s better than his planet of numbness. The fact that no one who has returned has learned why humans cry implies that those who came before him felt the same way. They all would have seen the ugliest dregs of humanity, but they all chose to stay, because anything is better than nothing.

Another Parting is magnificent. It’s not happy, but it is beautiful, and poignant. I recommend this web series to everyone. It just hurts so very, very good.