MBC Gayo Daejun 2013: The Dark Horse that Slayed Everyone 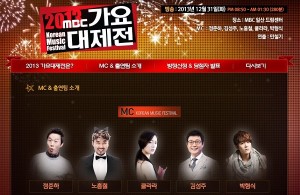 The 2013 Gayo season has finally come to an end! From past viewings, the SBS Gayo Daejun has always been the flashy favorite, KBS’s rendition would’ve been the one everyone hated on (but still watched), and MBC would’ve hummed along with their low-key showing. At first glance, 2013 appeared to be no different—but then MBC came and ran a fabulously produced program from start to finish. Camerawork and stage arrangements were clean, and even though they weren’t the most flamboyant or imaginative, the music festival was free of technical problems — the overall experience was utterly satisfying. To top it off, the performers decided to rock the K-pop world that night, and have an absolute blast while doing it — what a novel concept!

The MBC Gayo was a visual delight, a hands-down winner of the year. I loved the integration of the pre-recorded content with the live show; Crayon Pop’s “Bar Bar Bar” had never looked like such a hoot! I had difficulty warming up to the song when it first caught steam, but this gayo version finally hit the right notes with me. “Bar Bar Bar” is a song meant to be performed en-masse, and having tons of people participating in a flash mob in front of the MBC building was the perfect performance experience.

The special stages were a bit of a let down: the A Pink/B1A4 one was cute (but a tad flat), Key/Tiffany were awkward both on the duet front and the song front (I liked Key–not so much Tiffany), SM Town‘s “Like a G6” didn’t quite work (but at least they were energetic), and Ailee/Niel didn’t mesh well with each other. Call me old-fashioned, but the best special stage of the night were the trot stages. I LOVED them, especially Tae Jin-ah. It’s great to see Korean popular music in its most traditional form, and I’m not going to lie, Park Hyun-bin‘s “샤방샤방” is like my favorite song ever.

Another special stage I really liked was the one in which K.WillB and Lim Chang-jung performed “Please Call Me Oppa”:

Sistar did a decent job with their performance. Barring the slight remix of “Give It to Me,” their stage didn’t show much variation from their regular stages. Although Hyorin‘s intro really highlighted her vocals, I listened to it wishing she would move on from her Beyoncé tropes.

Beast was dynamic as usual, but Hyunseung stole the night for me. (Thank you Trouble Maker for giving him stage presence!)

T-ara tends to be underwhelming for me, but I really liked them here. For once they actually looked like they were enjoying being on stage and performing a jammin’ combo of “No.9” along with their follow-up tune, “Do You Know Me?.” In the same vein, After School totally jazzed up “First Love,” and it worked impeccably for them.

Out of the three collaborations that Hyori did, this one probably stands in the middle. The one with Dynamic Duo was really boring, the CL one fit her flashy style and had bad camerawork (like the entire SBS Gayo), but this one was sorta flat. I think that the concept was a good one, and I love Yoon Mi-rae, but she and the rest of MFBTY don’t have the kind of flamboyance that pairs well with Hyori.

While the Kara comments from the MCs were not the smartest thing said that night, I did enjoy the group’s medley. It’s unfortunate that they didn’t go through the whole thing as a full group, but what’s worse is that the whole endeavor, “the Kara Special,” felt half-hearted.

The original “Hush” is a very subdued song, and probably a hard song to remix without essentially re-composing the song altogether. This version kicked the song up a couple of notches, without losing the original grace of “Hush,” but it was evidently lacking some bass. Nevertheless, Miss A, why couldn’t you have performed this version all along?

B1A4. Killed. It. I liked this version so much more than the original, because the instrumentation unified all the independent elements that felt haphazard before. In fact, it almost seemed like “What’s Happening” should’ve been a rock song, and B1A4 how to perform the heck out of it.

Exo finally sang (the good part of) “Wolf” live. Too bad it looks like they then lip-synched “Growl.”

I’ve always been a fan of 2PM‘s “Game Over” from Grown, and I’m really happy that they performed it here. I would’ve liked to have seen the live chorus and orchestra from the SBS Gayo show up here, because then this performance would’ve really been epic.

Shinee‘s stage would’ve been totally predictable, if not for the great piano version of “Dream Girl” they performed with Henry. That being said, I have to confess that this is my favorite performance of “Everybody,” in terms of voice to backtrack ratio. (Okay, okay, I liked the scientists!)

All in all, the magic behind the MBC Gayo was the infective energy of the whole event. Four hours totally flew by as long as you skipped all the MC sections. Performers were constantly moving around the stage and connecting with the audience AND the camera. I loved how it created an inclusive environment, such that you (out in cyberspace) felt like part of the audience, even at 2am. (Yes, that’s when I watched this.) When everyone is enjoying themselves so much, it really isn’t hard to have a good time.

So readers, what did you think of the 2013 Gayo season and how was the MBC Gayo Daejun in particular? Which stages did you like, and was there anything that I left out? Comment away!