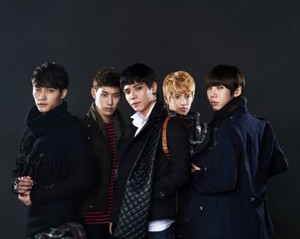 The world was against the rookie group K-Much from the start. Their company, Chrome Entertainment, gave them a laughable concept that was the hand-me-down of their label mate and they were gifted with stage names like “G.Low.” Yes, the odds were certainly not stacked in their favor.

Unfortunately, this bad luck carried over to the public’s opinion of them and the overwhelming response to their debut MV has been negative. There is nothing the international fandom seems to like less than a concept they view as over-done or unoriginal, so the fact that K-Much’s debut is literally the masculine version of Crayon Pop’s “Bar Bar Bar” just doesn’t fly.

The songs are incredibly similar, and there doesn’t even need to be any speculation about it since the company came right out and said that this song was a counterpart to “Bar Bar Bar.” Rumor has it that this is in fact the song originally intended for the girl group, but that it was later changed into the current day “Bar Bar Bar.” Whether or not that is true doesn’t change the fact that K-Much is being seen as free-loaders created by Chrome to ride on the coattails of their successful girl group.

However, that’s not the issue I have with this debut. It doesn’t matter why K-Much was formed and it doesn’t matter if the company is coasting on their past successes; the bottom line is that this debut wouldn’t stand well on its own either. Despite having some amusing moments, the MV is underwhelming overall and the mini album – all three songs of it – isn’t anything special either.

Judging by the beginning of the MV for “Good to Go” you’d think this was going to be a cute or funny boy group similar to Crayon Pop in some way. However, the rest of the MV involves swat gear and dark makeup; the two images simply don’t go together. If these two group identities were separated it would result in two fine concepts — one being cute and humorous and one being masculine and serious — so why Chrome felt the need to include both images in one MV doesn’t make sense.

The giant sea-monster — or river-monster — was hilarious, as was their dancing to “Bar Bar Bar” and being revived by Ellin. All of that led me to anticipate an equally cheerful song and quirky concept, so it was shocking to have the bulk of the MV involve nothing more than stone-faced boys dancing to a harsh song in black, heavy body armor. Perhaps the full coverage outfits is an ode to the equally covering outfits of Crayon Pop, but the swat gear simply didn’t fit in the MV.

On top of the ambiguous storyline and costuming, the camera work was nauseating. There were so few still shots once the dancing started that it was difficult to focus. There was a constant rotation of camera angle and a blurring effect that made it seem like the camera man didn’t know how to focus a lens. Yes, these are employed to make the whole MV seem more “edgy,” but all it really did was make it difficult to focus on the choreography and the member’s faces.

Even without the association to “Bar Bar Bar” the MV and song are sub-par. There is nothing original about the costuming, dancing, or song. The members carried it off surprisingly well, considering, and the group is not without potential. They had good facial expressions and were nicely in sync with each other, but even their efforts couldn’t change the MV itself. While they will mostly get flak from the public for copying Crayon Pop, those that can see past that will still be hard-pressed to want to give these boys another chance.

There was hope that their B-side tracks would redeem them, but sadly other two songs on the “Beyond the Ocean” mini album aren’t much better than the title track; at least they don’t sound like something from Crayon Pop which means they are being better received by the public. Honestly, they are just as unoriginal sounding as “Good to Go” and could be put on any boy group album. If you like boy-band electronica music than you will like these songs, simple as that, but if you are looking for something new and different you had better look elsewhere. “I’m Sorry” is a fairly catchy track and has that pop-ballad feel that is quite appealing, and “What Should I Do” has a dance-pop backtrack that is fun and a decent chorus, but both tracks fall just short of actually wow-ing the listener.

At the end of the day, I’d say that K-Much deserves another chance, but that their debut efforts have fallen short of amazing. On top of that, their association with Crayon Pop may have been enough to earn them a permanent dismissal by many potential fans because they are being viewed as unoriginal free-loaders. It is unfair to blame K-Much for their company’s choices, but unless Chrome Entertainment gets their act together and comes up with some new content they will lose all of the popularity they gained with Crayon Pop. K-Much is a good size, has attractive members, and talent does seem to be buried under that SWAT gear, so I won’t be dismissing entirely them until after their second mini album comes out for judgment.