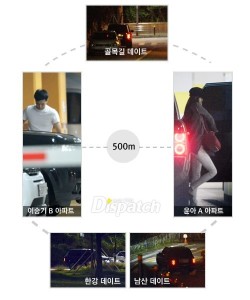 What a way to start off the new year! Dispatch has struck again, revealing a new pair of Hallyu lovebirds: SNSD‘s Yoona and actor/singer Lee Seung-gi.

The two were discovered going on dates by Dispatch as far back as September. The couple have mainly kept to meeting in cars to maintain secrecy, but that didn’t seem to stop others from finding out.

Both SM Entertainment and Hook Entertainment, Lee Seung-gi’s agency, have confirmed the news, stating that the two have been dating for four months. Yes, that’s right, SM actually confirmed a dating rumour to be true. 2014 has only just begun and it has already exceeded my expectations.

If memory serves correct, Yoona is the first SNSD member to be officially revealed as dating; this is a big change for the group and its fans, though it should not have been unexpected. After all, the girls are in their mid-twenties now and other idols have also managed to date openly (and even get married, in Sunye’s case). It was only a matter of time before the nation’s girl group started doing the same: they aren’t going to be girls forever.

It’s a bittersweet feeling, but there is a definite feel-good factor in all of this: after holding a flame for her for years, Lee Seung-gi has finally got the girl. He’s never made a secret of Yoona being his ideal type, as seen in this 2011 episode of Strong Heart:

And speaking of ideal types, there may be another good thing to come out of this now that Yoona’s taken: male celebrities having to come up with a different answer to the dreaded “ideal type” question.

Yoona is currently starring in drama Prime Minister and I, while Lee Seung-gi is playing luggage boy on Noonas Over Flowers. Congratulations to the newly revealed couple, and all the best for their relationship!