By now, the news should probably have sunk in that Girls’ Generation has taken home the YouTube Music Awards’ Video of The Year award. Basing this review on the judging criteria — videos that were shared the most quickly had the clearest indicators for worldwide popularity as well as their respective wins — it’s safe to say that those looking for a counterpoint to this view will not find it here.

Certainly though, the win has placed K-pop in the international spotlight, in the same way that Gangnam Style made waves last year; but the mood seems rather like a mix of “it’s time to proudly admit Korean pop culture has a place in the mainstream” and a “how did we suddenly get this big?!”. 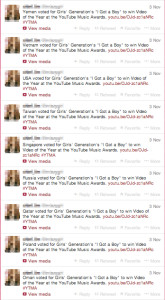 Having followed the voting process, I would’ve been more surprised if SNSD had not won. As evidenced by my Twitter feed, fans had obviously rallied together, and tweets for “I voted for Girls’ Generation’s I Got A Boy (video web address) to win Video of The Year at the YouTube Music Awards” had flooded my timeline.

While all fandoms are organised — voting opportunities are maximised per person; a joke about “using as many different devices or addresses” for each voting session also floated around — K-pop fandoms, especially the one in this case, do take things to the next level.

I picked up on talk that there would be relay sessions, where specific voting periods would be overseen by fans living in specific time zones. This would’ve been a huge, systematic team effort, where fans would vote under various (and often interesting) identities. Again, keeping track via Twitter, I caught “Mickey Mouse”, “My Father” and “Zimbabwe” casting votes. Maybe the President of The United States did throw in one for the girls.

Despite the supposed internal brouhaha, I’d argue that such power voting has not appealed to me, and more often than not I’ve found myself tuning out. This make me wonder: exactly how many videos — with viewers on the receiving end having watched and disseminated the clip — were shared? How many unique, eyes-to-the-screen views were there amongst those numbers? This idea isn’t new to freer online voting systems, and in this case, it certainly doesn’t make an exception of SNSD; a majority of views could be accounted for by a minority audience.

And then of course, there were reactions to the win. Angry reactions by other fandoms fuelled passive aggressive responses from the SNSD front. I’ll let the screen shot do the talking.

As always, in fandom relations, it’s about a vocal minority making their opinions known, and it’s always the most controversial opinions that stick out in people’s minds.

The tension here is within reason, especially among listeners who are far-removed from K-pop. I’d be just as surprised if a smallish, Asian (or European) goth-punk band ended up winning. Really, the least that can be done, by us lovers and consumers of music, is to show appreciation for the differences within the wider music industry, and then go from there to make informed decisions on what we really think.

And if anyone was still wondering, you couldn’t really call Girls’ Generation a fluke.

On a lighter note, I have heartfelt congratulations for Girls’ Generation. After slogging it out all these years, they’re as good as they get as far as girl groups in South Korea go. Sure, other artists may have edged them out in a field or two, but Girls’ Generation has built a solid base — their group image and longevity, SM’s marketing prowess, their strength in the various performance fields (save for rapping, which is a story for another day) — to work off from. I couldn’t say the same about a bunch of other personalities out there.

To close things off: now that the girls have confirmed their “worldwide” presence, is that expansion into American still on the cards? And more importantly, is Interscope still keen?

Leave any comments you have below!