J.Y. Park Gets Sentimental with "Had Enough Parties"

Park Jin-young (also known as JYP) may have his hands in a lot of things at his label JYP Entertainment (and beyond), but he never fails to leave just enough time for himself to make his own music. This time around, he’s returned with his tenth album Halftime, with lead single “Had Enough Parties.” 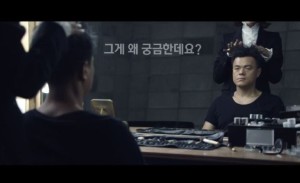 The music video begins with a scene fresh out of a sobering French independent film. JYP speaks to his make-up artist (dubbing the French poorly, might I add), asking questions about the purpose of life. More specifically, he asks what his life path will be after this moment. The room is a dank grey and, as the camera quickly cuts to a shot of the whole room, we see that he is alone, suggesting that the make-up artist is not actually in the room with him.

Nonetheless he is told not to worry, that worries will age him faster. Suddenly, the make-up artist appears at the door, apologizing for being late, confirming suspicions that the previous conversation was not real. JYP looks back. A puzzled stare. The scene ends.

While the opening appears to be quite dramatic, it serves as a great lead-in to the song itself; it takes the viewpoint of a man reflecting on his life, with the realization that he feels lonely and unfulfilled despite having accumulated fortune and success. JYP speaks of fatigue and boredom with the luxurious lifestyle: he has drunk and partied enough and now really only wants a little love to make him feel complete.

While the lyrics tell a straightforward story, JYP makes the visuals more complex than you may expect, choosing to give himself three different images to show diverging paths — tying into the “Where am I going?” question that he asks at the video’s start.

The actual song begins with present-day JYP, navigating a club with practiced ease — he’s seen performing on stage, and a little while later, seducing a woman on the dance floor. Soon, the camera pans up to the mezzanine where a much older JYP schmoozes with a bevy of younger beautiful women. This is JYP, living the wildly successful lifestyle that leads him well into his senior years.

Often, this older version of Park Jin-young is shown interchangeably with his younger counterpart, as their lives are the same. If he follows this path, nothing changes. He grows older but the scene around him will always be the glitzy, superficial world where he became who he was.

Yet, this isn’t the only option he has. Cut to a white-haired, aged JYP sitting outside on an extravagant terrace overlooking a fountain. At first he is alone, but a large family comes to greet him, likely his children and grandchildren. An older woman’s hand touches his shoulder and he reaches out to affectionately grab it. 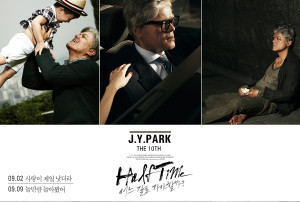 JYP smiles in this scene, mainly because he still has his wealth and success — represented by the ornate background — that he shares with a family that has grown to be his main source of fulfillment.

Artistically, JYP could have ended it with these two personas and saved a lot of make-up as well. But instead, he chose to show a third rendition of himself, except this time he ages in squalor.

This JYP is haggard, sporting unkempt hair and soiled clothes. He hasn’t bathed, and he sits outside on a public bench. In this future world, he’s somehow lost everything and looks completely degraded. And on top of that, he faces loneliness. We can derive that this version of him is the result of not having any deeper emotional connections; he’s left neither love nor a glamorous world to distract him from his sorrows. Not surprisingly, he’s most repentant and emotional in this role.

The three roles allow JYP to mildly toy with a well-worn debate: what good is success if you have no one to share it with? Another song from Halftime, “Love is Best” is said to explore “the purpose of human birth and life.” “Had Enough Parties’s” song and video appear to be a continuation of that theme. Much of the heavy-handed conversation at the beginning of the video is filled with questions about these two issues; they are the root of his dissatisfaction and frustration as the song plays. 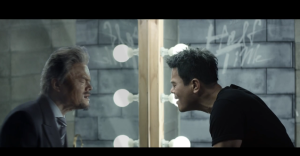 This is especially interesting as Park Jin-young has had a storied, multi-faceted career in the Korean music industry. Ten albums into his own music career and 40 years into his own life, it’s an appropriate time to reflect as he moves forward.

The song represents a mature choice for subject matter, but from JYP, it makes a lot of sense. The shots of him singing sadly into the mirror in the video hint at this desire to dissect what he has done with his life and how he can become more satisfied with who he is.

Vocally, “Had Enough Parties,” as a sorrowful, longing song isn’t about belting as much as whimpering, and JYP keeps the vocals relatively light and high — nearly airy. The beat that drops during the first chorus — a nice drum and snap combo — carries the song really nicely and stops it from being bland during the following verses.

As a music video that focuses primarily on plot and not performance, there are few scenes of JYP truly performing “Had Enough Parties,” for the song’s sake alone. His characters sing most of it, but there are select shots of what seem to be full choreography for the song, smooth but slightly disconnected movements from what the eye can see. 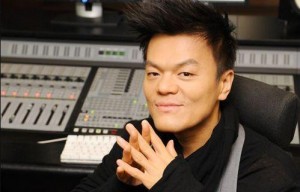 JYP typically has great ideas for the songs he composes, lyrically and sonically, and this is no exception. It’s nice, but maybe in this case it’s only just nice. The song doesn’t do much to evolve.

“Had Enough Parties” captures one mood and follows through on it to the end, with both visuals and sound. It definitely doesn’t stack up to my favorite JYP tune, but it’s certainly good in its own right, sticking to the crooning R&B-inspired style that he’s so good at.

The video, while on the angsty side, has the right amount of drama to keep you watching to the end. While some of his solo efforts seem as if they’d be easy hand-outs to his protégé group 2PM, “Had Enough Parties” is definitely a project that only JYP — with his industry-veteran perspective — could’ve done. JYP’s “Had Enough Parties” gets a 3.9/5.