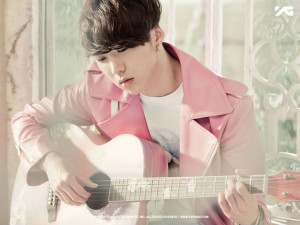 Those of us scanning our facebook pages around 11 PM EST on August 13th may have noticed that YG Entertainment rather suddenly dropped the third single from newcomer Kang Seung-yoon, “맘도둑(Stealer).” Although other singles from Kang have been hyped, or maybe overhyped, and YG seems to be seriously guilty of releasing everything all at once with way too much hype, it may be that this time they did it wrong.

The song is not necessarily anything to write home to the Seoulbeats readership about. It is, in a very real way, merely standard love rock song fare. It’s better than the last two singles, but that isn’t necessarily saying much. Despite his beautiful live voice, YG drowned it in a sea of bland contemporary rock sound for the first two songs. While “Stealer” (YG’s translation, but its literal translation is “Thief” in Korean, some have insisted) has a bit of a kick to it. What really sells the song is not the sound itself, but the stunning visual presentation in the form of the music video. Kang stars alongside actress Yoon Jin-yi, and where the song takes off a bit, the music video swells with a heart, a soul and a beat: aegyo in a form that promises to be equally appealing to adults and teens alike.

Indeed, while Kang is supposed to be the star, Yang Hyun-Suk’s casting choice in Yoon was excellent, and she steals the show. Lipsyncing a la the supermodels in George Michael’s “Freedom ’90” to some of the DEE.P and Choi Pil-gang-penned lyrics, and looking lovingly into the camera, Yoon proves her mettle as the Queen of Aegyo that we knew her to be after seeing A Gentleman’s Dignity, but this time with an undeniable edge which is a vast improvement over the essentially annoying Im Me-ari, all in a music video where she delivers no actual lines! Yoon’s chemistry with the camera is nothing short of a complete delight.

The love story between Kang and Yoon is set in a lush backdrop with Alice in Wonderland-like qualities. As the video moves from animation to live action, it opens with Yoon sitting on a school bus, looking dreamily out the window. Much like in the Alice story, the bright flowers and the color of the light cascading through them in her fantasy are both familiar and a little too unreal, a little bit absurd but in a dreamy way. Kang, the object of her dream, next appears strumming his guitar and singing in the stunning voice that made him a tough competitor on Superstar K a few years ago. Both the video and the song really take off as Yoon syncs to Kang’s swelling voice:

Given the Alice theme, it’s perhaps not surprising that Tom Petty and the Heartbreakers’ “Don’t Come Around Here No More” comes to mind, mostly because it’s the complete opposite. While Petty’s music video dreams up a fantastically terrifying journey down the rabbit hole for Alice, Kang Seung-yoon instead conjures paradise.

This isn’t the first time that K-pop or even YG has utilized elements that recall this tale. However, while Seungri borrowed heavily from Petty’s retelling of the story in “VVIP,” “Stealer” reproduces it with Tim Burton-esque visuals mod the creepy drama. A traditionalist might say that this completely neuters the Alice story, and in a way it does, but it’s just too nice for it to fall flat.

Possibly the most surprising thing about this music video was the other video it reminded me of, an old memory from my childhood. As I sat and watched “Stealer,” I was reminded of why I was so enthralled with MTV at a young age. It brings back the magic of my favorite video of 1988, Rod Stewart’s cover/rewrite of “Forever Young.”

Although looking back I now realize that video wasn’t much, for a six year old it carried that same feeling of freedom that the Alice story promised, paired with the beauty of the open road and the message that things would always be this way. While the song by itself never would have captured my attention, the music video very much did. And while Rod (Bob Dylan really) lied to me in a lot of ways, “Stealer” is a reminder that all these years later, I can still look at a MV with the same fresh, wide eyed excitement and that feeling in my chest that something lovely is unfolding before my eyes. This is the same feeling that I came to understand as I fell in love with my husband, and in that sense, this song joined by the music video, couldn’t have captured the feeling better.

While Kang Seung-yoon has the firepower of one of the big three labels behind him, and that will sell records at first, what will make him a lasting star is memorable music and/or visuals. It seems like his team has figured the latter out, and they might be working their way to an operational model for the former. Song: 3/5, MV: 4/5