A Rainbow Comeback with "Sunshine"

Rainbow was last seen promoting “Tell Me, Tell Me” for Rainbow Syndrome starting back in February. To accompany their album, they’ve released Rainbow Syndrome Part 2 with title track “Sunshine.” It seems like the cute is here to stay, as opposed to their sultrier days with “A” and “To Me.” “Sunshine” brings a splash more of vibrancy in comparison to the pastel-driven “Tell Me, Tell Me” and is a bit more frivolous.

The music video follows the seven members as they follow their “sunshine boy,” intending to catch him, in a way. The entire video focuses on this change, from the members getting the Wanted ad, to gearing up with whatever weapons they have, to actually meeting the man, and then trying to get him — something Jae-kyung seems successful in. Obviously, it’s not a rigorous pursuit of the man: it has more to do with love, affection, and attraction than anything. Making the catch refers to getting together with the guy.

The best way to describe the video is as just the right amount of cute. Most of the antics are entertaining rather than off-putting, aided by the members both clearly overacting in some scenes while just having fun in other ones. There are little jokes like when Jae-kyung assigns weapons to her team, taking off her shoe to give to No-eul to use and instructing Yoon-hye to use her chin. Also enjoyable are when some of members use doll constructions when they go after the man. It looks ridiculous and actually fun to use. Aside from the unnecessary exaggeration of a not-so-high note, the girls and guys do a good job of being over-the-top.

The aesthetics vary between the lighter, pastel colors, like for their modified sailor/flight attendant suits, to the bolder colors when they’re in battle mode. Those brighter colors bring a welcome pop to the music video that could have been muted with solely a lighter palette and far too similar to “Tell Me Tell Me.”

Regarding the lyrics, probably the oddest set of lyrics was “Go Jerry, Go Jerry, Go Jerry Boy.” I honestly kept wondering when I was told that this guy they’re after is Jerry, but an explanation that makes a bit more sense is the relationship to a long-standing cartoon favorite: Tom & Jerry. It fits with the chasing theme and turns the situation into a cat and mouse relationship with the girls encouraging it. This connection isn’t apparent. As “Jerry” is used multiple times in the song and is even written on the backboard, should the Tom & Jerry connection prove true, it should have been integrated better into the lyrics and music video. There’s a split-second shot of the girls dragging a large slice of holey cheese with the “sunshine boy” and Jae-kyung inside, but it isn’t clear that it’s cheese unless you’re looking for it.

The choreography sticks to smaller movements, moving a leg out with accompanying hand movements, swishes of a skirt, or claps around. It’s light and suits the song. But as a whole, the choreography and the song come off as generic, especially in the dance scenes. It’s the same problem that Rainbow suffered with “Tell Me Tell Me,” as Jasper mentioned in his review, though to a slightly lesser degree: the drama scenes have sufficient spunk to still be interesting. 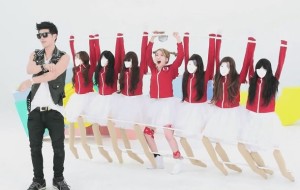 While similarities between the title tracks for the first and second halves of Rainbow Syndrome are telling about the whole album’s cohesion, it does introduce the question of why they’re bothering to promote a similar track a second time. Usually these couplings are used to showcase a different side or image, giving a reason to separate releases. The softer, cuter side seems to be the default for girl groups looking to make it big when other concepts didn’t work out, so perhaps the goal is to work that side as much as possible before changing concepts.

Did Rainbow’s “Sunshine” brighten up your day? Leave a comment with your thoughts!