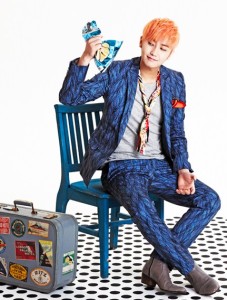 Heo Young-saeng is back with a colorful, upbeat and creepy MV for spring. “The Art of Seduction” is from the SS501 member’s third mini album, Life, and it does not disappoint with its retro styling and hilarious premise, which perfectly complements the song.

The title is tongue-in-cheek, of course, because the song is not about how to seduce someone. The lyrics paint a picture of a person obsessed with their target of affection, and while the words are repetitive, it’s intriguing to see Young-saeng take on the voice of an undesirable person. This isn’t a song that could be romantic in the right context; the opening lines about “trapping” a person “alone” in the singer’s heart plant it squarely in the stalker category.

However, the upbeat tempo keeps the song light, while the disco beats give it a fun flavor. Young-saeng and his image play with the lyrics to produce a funny twist on what we expect idols to sing about, and the video suggests that the song reflects some of the more extreme fan behavior. Young-saeng’s smooth singing serves as the fangirl’s voice in the video, delivering not only a fun MV, but also a very smart one.

The video starts out with a fangirl hunched up in her chair, drawing her bias, while his visage plays on her many TVs. At first it may seem like B2M Entertainment is setting up an unsubtle parallel between fangirl and us, but while the copious amount of pictures may ring true for some, the ominous thunderstorm and police sirens do not. The soundscape makes fangirl seem creepily obsessed. These sounds are quickly wiped away by the start of the song, but the opening scene lets the viewer know that this MV is not your average fangirl story.

As the first funky beats kick off, obsessed fangirl turns cute and quirky, lounging on the floor, eating sweets and flailing over Young-saeng. What’s even better is that in the next scene she wakes up and Young-saeng is in her room, smiling and ready to do all those fan-fantasy things, like giving her flowers and dancing for her. However, after a few tied-up shots of Young-saeng and a milk carton “wanted” ad (probably meant “missing”), it’s clear fangirl kidnapped Young-saeng for her nefarious plot to lock him in her kitchen pantry and shake flowers in front of his face. 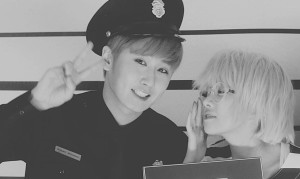 The rest of the video switches between fantasy and reality, and fangirl becomes sinister to the point that even fantasy Young-saeng is creeped out during the bridge. As the music crescendos, we are treated to a shot of a skull to signal that fangirl has completely gone off the deep end. The video ends with the police sirens looping back around, and fangirl taking mug shots with the officers as if they are Young-saeng.

What makes this video work so well is its cohesive plot, shown through clever cinematography, lighting and styling. Immediately the first scene sets an unsettling, sinister tone, which is maintained throughout the MV by flashing lights. The flashing lights are initially from police cars, but then are echoed in various sets like the white, orange-jacket room and the blue cage room. As the video builds, the flashing lights pervade everywhere, even in the blinking of the TV, keeping the criminal presence in the viewer’s awareness.

The other notable lighting feature is the cool, white hazy light that floods every fantasy sequence, giving the scenes an unnatural air. However, it’s also quite blinding and tends to wash out the characters. With that light, Young-saeng blends into any white background he’s against, and the fangirl practically disappears due to her muted dress and white-blond hair. Since the reality scenes are tinged with a blue-green light, our characters spend most of the video bathed in a sickly wash. While this is appropriate in terms of plot, it’s too bad that Young-saeng and fangirl couldn’t pop visually as much as the clothes do. 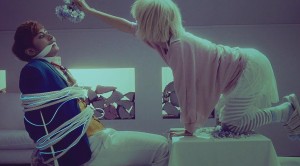 Contrasting the lighting are the bright clothes, which add to the comedy of the video and lighten the mood. The clothing is modern, but its colors and patterns give it a ‘70s flair, emphasizing the disco sounds in the music. Young-saeng wears a total of seven outfits, which could be a little too much, but since the outfits are introduced at beat shifts in the plot, the plethora of clothing enhances the MV. Young-saeng’s outfits are fitted jackets and tailored vests, presenting him as the idol he is, while his leading lady sports the shapeless shut-in sweater.

The rooms have a retro vibe as well, but their more dominant feature is technology. It might be old technology with all the cathode ray tube TVs and film reels, but none-the-less it illustrates technology as an important aspect of fan culture. Its prominence shows that Young-saeng is trapped in the world of the fan, and the only non-retro prop is the futuristic blue cord that is used to literally tie him up. The look of the MV even devolves into film occasionally with grainy shots and flickering screens, which not only reminds the viewer that they too are involved with technology, but also refers back to the blinking police lights from the beginning. 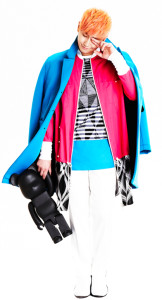 The only less-than-stellar shots are the dance scenes, which are too short and choppy to demonstrate the fullness of the choreography. As is evident from the live performances, the dance contains a lot of interaction and movement from the backup dancers, which does not come through in the MV. None of the movements are eye-catching enough on their own, so the dance really benefits from seeing the full movements glide into each other. Young-saeng dances with confidence and ease, but could stand to be sharper. As for the acting in the MV, Young-saeng adequately flips from charming idol to scared kidnapee; but the fangirl steals the show as she expertly rides a fine line between creepily obsessed and non-threateningly adorable.

Through the video and song, Young-saeng pokes fun at idol images and fan culture. It’s not a serious critique, but one we’re meant to laugh at and dance along with. Each element of the video ties in with this theme, making “The Art of Seduction” one of the most stylish and cohesive videos yet this year. I give it an enthusiastic 4/5.

Readers, what did you think of the MV? Also, did you listen to the rest of the Life mini album? (My favorite track so far is “Life.”)