How Epic Is Epik High's Comeback?

Well, not much. But is it as disappointing as some Epik High fans think? 99 has received some mixed responses, and overall the album is behind most of Epik High’s past works, but it’s not an irredeemable album at all — actually, one of its flaws is how irregular it is. Some things work, some don’t, and I’m still trying to figure out some of them; let’s have a closer look at the good, the bad and the weird in this album. 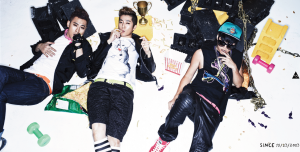 “The Bad Guy” has a memorable surf rock-y rhythm, the Tarantino-esque chorus is definitely quirky in a good way, but the verses are the best parts, especially Tablo’s last rap, which ends with “I’m your father but I’m also one bad mother” — Tablo almost gets out of air, and that’s good because it makes it sound much more intense.

Dynamic Duo have been constant collaborator of Epik High ever since the beginning. “You Don’t Deserve Her” features only Gaeko, and is arguably one of the best tracks of the album — it has the simplicity than some of the tracks in the album lack, constructed solely based on beatboxing and a guitar. And of course Gaeko’s singing, which is always soulful without being excessive.

I’m not much into the fact that the rap parts in “Wrong” are bland and mechanical (will talk about this later); however, I really like the tune and the guitar riff, and the chorus, although a bit messy sound-wise, is smooth and comely. The whole track has a very mellow sound, and the ending is as abrupt as perfect. The song may seem a bit repetitive or linear, but because the sound is very suave it kind of fits and doesn’t bother me eventually.

“It’s Cold (featuring Lee Hi)” is fantastic in a should-belong-to-Tablo‘s-solo-album way. “It’s Cold” sounds way more like some tracks from Fever’s End than anything from this album; I can’t help but think of “Home” although they are quite different, probably because the sung part is somehow reminiscent. It’s the more melodic out of the album, which is probably why it’s also one of my favorites; Lee Hi‘s part is nothing especially difficult but she pulls it off just right.

The lyrics are for most of the parts great, as it is usual coming from Epik High and Tablo. Some tracks such as “Don’t Hate Me” and “Kill This Love” are a bit more conventional in its approach yet still delightful, but my favorites are probably “The Bad Guy”‘s references to pop culture and TV, “It’s Cold” and “You Don’t Deserve Her”.

I really like how they somehow dodge falling in the cliché in “It’s Cold” — it’s already cliché enough with the winter metaphor as a broken heart, but the lyrics are endearing and somehow cozy:

There’s also something really touching about way the lyrics in “You Don’t Deserve Her” are a confession but not quite, or as Epik High themselves said a shy confession:

Why in the world will someone like you date a guy like that?
You don’t have to be my girl
I just think you’re too… too good.

The two title tracks are probably the main reason why some people have had negative reactions towards the album — they are supposed to represent and promote the whole album, but they are disappointing at best.

Epik High declared they were aiming for a 90s sound in this album, specifically a Seattle grunge sound; “Don’t Hate Me”, however, gets only halfway and sounds more like American pop-punk than grunge. And I’m not the biggest fan of the genre — been there, done that; I was fifteen, I though Blink-182 was cool because they had lots of tattoos and I had no musical taste whatsoever. The song just sounds way too teenager-y, which doesn’t fit them at all taking into account that they are in their thirties and have been active for almost ten years.

Park Bom‘s featuring in “Up” is what I call a pointless contribution — I’m not against Park Bom singing per se, but I’m all against YG throwing her into songs by her labelmates for a random (screeched) sentence: I came to hate her appearance in GD&TOP‘s “Oh Yeah” just like I’m coming to hate the one in “Up”. There’s also something happening way too much in this album, that is the small amount of rapping parts (taking into account that Tablo and Mithra are, you know, rappers) and the huge amount of ‘chants’ — the bridge in “Up”, half of the supposed raps in “Don’t Hate Me”, most of the verses in “Wrong”, most of “New Beautiful”. As I mentioned when talking about “Wrong”, the raps sometimes are too rigid, and I’m more fond of Mithra and Tablo’s emotional kind of rapping, such as the “It’s Cold” one.

And “New Beautiful” is the epitome of this chanting thing, and actually sounds like a Black Eyed Peas‘ track and I’m not implying anything positive with it — not that I hate the Black Eyed Peas. Ok, maybe a bit, but not really. Besides, the beginning sounds exactly like the beginning of a Big Bang’s track (“Tonight” basically). I hate to use this expression, but overall “New Beautiful” just screams ‘mainstream’.

“Kill This Love” would probably be one of my favorites from the album if it wasn’t because of the excessive dubstep ending. Dubstep? Really? I definitely have nothing against dubstep, and they integrate it much better than it usually is in K-pop, but a dubstep break is just too cliché right now. The beginning is actually great, but then halfway “Kill This Love” starts to sound like a remix version of itself and totally kills the mood.

It sounds a bit cliché to blame YG or say they don’t sound like Epik High anymore; when has Epik High ever sound like Epik High? When did ever “Ask The Sky” sound like “One”? Or “Run” like “High Technology”? Epik High have experimented and evolved by themselves before, they didn’t need YG for it. But also defending that Epik High maintains its musical independence regardless of the label they are signed under when most of the tracks from the album have been written/produced by YG’s in-house writers Choi Pil-kang, DEE.P and Choice37, is kind of naive. And where does that leave DJ Tukutz, who is credited as composer in only one of the nine tracks? 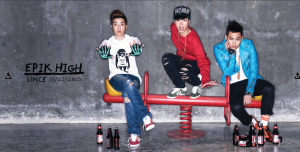 Because independently of whether it’s all YG’s fault or not, I’m more interested in Epik High doing alternative electronic hip-hop or trip hop than pop-punk or dance-pop or dub-step and I prefer MYK than Park Bom featuring in their songs. And I definitely prefer when their songs are more about Tablo and Mithra’s raps — they are rappers, after all, and that’s what they do best. In most of the songs, the raps are bland, lack intensity — and I know that’s not because Mithra and Tablo aren’t good rappers, definitely, but the songs are structured giving way too few space for the rapping parts.

It’s also inevitable to compare this album with Tablo’s solo album last year. Fever’s End was intimate and raw, and it’s pretty obvious Tablo was trying to get over that stage and start anew with this Epik High’s album — there are still some references to his personal problems, but in a more upbeat way; it’s not so much a mourning attitude anymore as it is a fuck off to the haters. And while I’m glad Tablo’s personally confident enough for it, I will still always prefer the emotional nakedness that was his solo album.

99 is actually an album that grows on you (or at least in me, since I can honestly say I openly hated it the first time I listened to it); fortunately the rest of the album sounds much better than the title tracks. Yet it’s Epik High, and they can sound even better. 99 is still Epik High, but a watered-down version of Epik High.