What Music Will You Listen To? 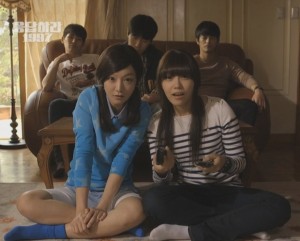 Schools and universities get filled with students when fall begins and K-pop is much alike. While the music scene never takes a break, it’s also one of the busiest and most entertaining seasons of the year, with artists willing to leave their audiences impressed before snatching some awards. So let’s grab the popcorn and see how idols plan to delight us for what’s left of 2012.

I don’t think it’s necessary to tell anyone about one of the most awaited releases, a.k.a. DBSK’s “Catch Me.” And while this has already seen the light of the day, SM Entertainment still kept a bag full of fresh, delicious cookies to serve us as the weather gets chilly (or hotter, depending where you live). For once, SNSD aims at a comeback this October (although November is still a valid option). Their latest Korean album hinted (not strong enough, in my opinion) at a change in music style and attitude and as much as I think ‘experimenting’ has always been some sort of gimmick with the girls, I and most of their fans need a reminder of what the group is capable of. EXO will also attempt to release an album until this year closes (SMent’s schedule would indicate a mid-November – December release). Follow-up songs after entertainers’ debut usually help people figure out their identity and musical direction, so we’ll just have to wait and cross our fingers for the best.

Sticking with the big players, expectations reach sky-high levels with Epik High coming back after three years. September will attest the first album the boys will pull out with YG Entertainment. Speaking of queens and kings, Son Dambi’s latest announcement puts the fans on hold a bit more — or until October 8th to be more specific — for her mini-album, unless she postpones it again. 2NE1 also delayed their official album date due to their world tour, but fans expect an October release and see what they’ve prepared besides the lead track, “I Love You.” Brown Eyed Girls’ Ga-in comes back these days with “Tinkerbell,” a song from her second solo album, Talk about S. I wouldn’t have bet on her individual endeavors to be very consistent, but her new song resembles Step 2/4’s distinctive sound, with Spanish influences and a sensual, but angst-filled concept. The track be released on October 5th:

A lady from Cube Entertainment fancies Latin music as well: Hyuna. Since 4Minute enjoys some success in Latin America, the company decided to go for this music style for Hyuna’s second solo effort which is expected to come out in October. Another group member going solo should be JeA, expected to release music in late September/early October. Rainbow set their sights on October too, after their summer comeback was delayed. Miss A is also rumored to continue releasing music this year, but no date was announced. And for those who enjoy amazing vocal skills, Navi will let out “Don’t Go” on September 26th.

It won’t be though just a ladies’ season. To say Psy garnered attention with “Gangnam Style” would be an understatement; the second part of his Psy Best Sixth will be out this fall and who knows what aces does he have up his sleeve? 10CM plans to finish their album this October and offer their fans 2.0, about two years since their first album, 1.0, enjoyed their public’s appreciation. The rumor treadmill had SHINee on the watchlist for a late-year comeback, but SMent hasn’t released anything official yet.

Besides idols returning on the music scene, this fall and winter will have their fair share of debuts. JYP plans to debut 15&, a duo formed of K-pop Star winner, Park Ji-min, and another 15 year old rookie. Ji-min’s competitors with whom she sang during the contest will also be debuting, but under YG’s label. The group, consisting of Lee Seung-joo, Lee Jung-mi and Michelle Lee, with the addition of Lee Ha-yi, will perform under the name of Su Pearls. The same company plans to debut another girl group, interestingly promoted without much information. Lunafly will enjoy their official debut on September 27th.

There are still artists who announced their comeback but seem incredibly indecisive: Kahi will focus on her solo stuff starting with September; Hyori is not very sure either of the material she wants to include on her album and Ailee has a tight schedule to run so nothing precise as of now. But until then, there will be plenty of songs to listen to. Which one are you expecting? Anyone else you have your eyes on?