Not too long ago, SM Entertainment held a press conference for the opening of SM’s newest venture, the S.M.ART Exhibition. This exhibition showcases a variety of content, its aim to “export” SM’s entertainment around the world. The showcase features around twenty different types of interactive entertainment, ranging from life-sized holograms to 3D movies. To commemorate this event, most of SM’s biggest artists showed up looking their very best. 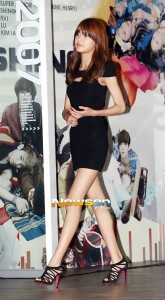 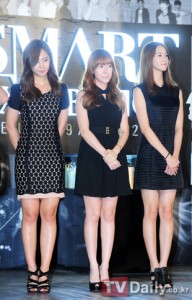 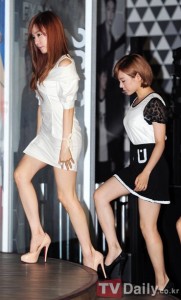 SNSD arrived wearing matching dresses of black-and-white. Their outfits overall were very boring and bland, lacking color or anything else that would’ve given them personality, but the ladies looked very pretty nonetheless. Sooyoung went a sexy route in a skin-tight black dress while Yuri, Jessica, and Yoona looked more prim in their dresses. Yuri’s almost shapeless dress looked a little frumpy, the lace overlay and solid shoulders doing nothing for Yuri’s sexy image. Yoona’s silky dress is nice but without accessories, her look lacks character. Same with Jessica, her boring all-black outfit does nothing for her. Tiffany wore white instead of black, but her dress seemed to awkwardly fit her figure. Meanwhile, Sunny looked very cute in her outfit, the colorblocking breaking the monotony. 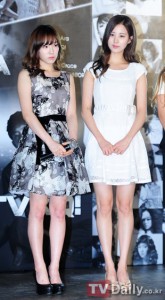 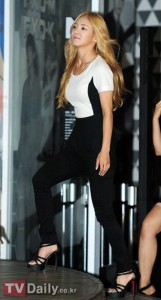 SNSD’s leader, Taeyeon, wore a black-and-white dress with a full skirt and sash. Cute as she looked, the oldest member of SNSD looked remarkably young in her tea party-like dress. Taeyeon’s newest hair color washes her out a little. Seohyun, the youngest member, looked entirely innocent in her white dress. Both ladies looked youthful and lovely at the event. In contrast their innocent looks, Hyoyeon’s outfit was more posh. Instead of a dress, she wore fitted black pants and a monochrome peplum-style dress. Hyoyeon looked sexy and classy for the exhibition, but I wish a little more had been done with her hair. 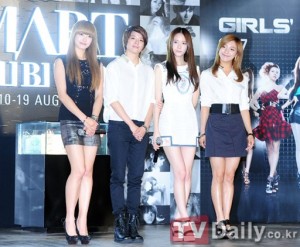 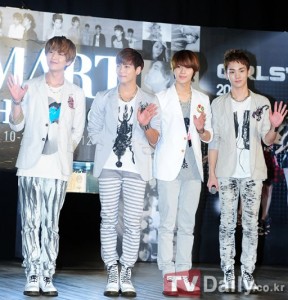 F(x) also came to the event, minus Sulli. Like SNSD, f(x) wore matching outfits. Compared to the others, Victoria looked a little under-dressed in her metallic mini-skirt and embellished tank. Next to her, Amber wore an unflattering baggy white shirt, which only caused her to look more masculine. Krystal looked sexy and beautiful in her white mini-dress and sleek hair, but I would say that her hemline is uncomfortably short. I’d feel terrified of flashing someone in a dress that tiny. Same goes for Victoria. Luna lucked out and was given a longer skirt to wear, but her outfit would look more appropriate at an office than at an event. Also missing a member,

SHINee appeared at the event wearing oddly printed jeans and blazers. SHINee’s outfits are much more casual and fun than f(x)’s or SNSD’s but they still bear the same bland color scheme: white with varying shades of grey or blue. The graphic tees, printed skinnies, odd pins, and Doc Martens kept SHINee’s fashion true to their boyish image without making them look too juvenile. Of the four, Key looked the best, his outfit fitting him perfectly and the different shades of grey matching nicely. Maybe it’s because they’re older, but Jonghyun and Onew looked a little silly in their outfits. Their jeans were loud, their blazers were too boxy, and the patterns didn’t blend together as nicely as Key’s. Too much was going on in Jonghyun and Onew’s outfits, the T-shirts and printed jeans clashing and fighting for attention.It would’ve been better if their jeans weren’t patterned like Taemin’s. 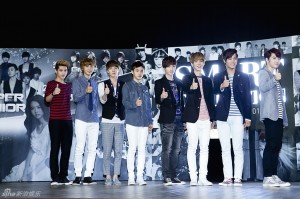 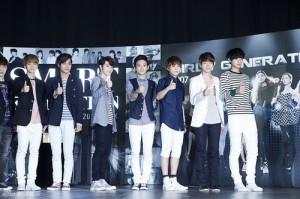 SM’s newest group, EXO, also attended the event, and like the other groups present, they matched. Unlike SHINee, Exo has more a preppy style, wearing striped shirts and red, white, and blue. Compared to his airport fashion, Kris looked very casual in his striped red shirt. His hair was in desperate need of dyeing. Chanyeol always looks cute but his chambray shirt and tie did nothing for him. Sehun’s checkered grey trousers clashed with his blue ascot and lose black vest. D.O. wore a pin-striped striped shirt, and his outfit wouldn’t have been so bad if it weren’t for the camo-printed bowtie. Bowties are cute but camo clashes with stripes. My darling bias, Lay, looked the most casual and cool in his faded jeans and graphic shirt. His structured blazer brings him to match with his band mates. Next to him, Lu Han looked perfectly preppy and adorable in his nautical outfit. Likewise, Kai looked handsome and polished as well. A different jacket might’ve looked better in Suho’s outfit, and my other absolute favorite member of Exo-M, Chen, was aged by his combed-back hair and bowtie. Appearances are misleading, because although Xiumin looks like the most adorable boy you’ve ever seen in his denim shirt and white shorts (the simplicity of the outfit makes it work for him), he’s actually the oldest member of Exo. Lastly, Baekhyun and Tao both look good in their casual, simple outfits.

Which looks from this event are your favorites?