Junsu, blue hair, English, and ladieeeez. Never thought I’d see those four things come together in the same context, but Junsu’s (or rather, XIA’s) latest MV has managed to prove otherwise.

At this point, the idea of JYJ’s Junsu engaging in solo work has become a rather familiar concept. Having released his first solo single, XIAH, in Japan two years ago, Junsu kicked his solo career back into gear with his more recent full-length album Tarantallegra earlier this year.

Now, Uncommitted marks Junsu’s first attempt at recording and releasing an English-language track — a move that was met with mild skepticism by critics (who are generally wary of any K-pop idol attempting anything in English) and fans (who still remember vividly the days of “I’m select” and “Oh My God Sun”) alike. But the single ought to be given its fair share of credit. For one, the English is really not that bad. More importantly, the release of an English-language single and MV holds far more weight than the simple merits of an artist’s ability to pronounce words in English.

There’s one thing about English-language releases that is almost always overlooked and underappreciated whenever a K-pop artist comes out with a single for the American market: the measures taken to ensure that American creative staff are heavily with the project. It’s not dissimilar to the way Korean companies would collaborate with Japanese staff in the earlier days of Hallyu in Japan in order to create an authentically Japanese product. The “Uncommitted” music video was directed by Marc Klasfeld, who boasts an impressive laundry list of past works (Katy Perry‘s “T.G.I.F.;” Fun‘s “We Are Young;” Far East Movement‘s “Rocketeer;” amongst many others), and whose experience and artistry is evident in “Uncommitted.” While I found the cuts from scene to scene to be confusing and sporadic (and the fact that the same scenes were being shot from different angles in every cut certainly didn’t help), the video was shot beautifully and made no attempts to be something that it wasn’t.

But to be honest, a part of me feels as if I’m grasping at straws in trying to justify my love for this song and video. I loved the song upon first listen, and my love for the song was magnified by the fact that I’ve personally been waiting for Junsu to release a pop ballad like “Uncommitted” ever since “stroke me like an arpereggio” became a thing. On top of that, the artistry and pure prettiness of the music video should have given me very little room to complain. But there was something about the video in conjunction with the song that left me feeling very lukewarm about the whole single — a feeling that I’ve been trying to reconcile because hey, finding stuff that you genuinely like in K-pop ain’t easy. 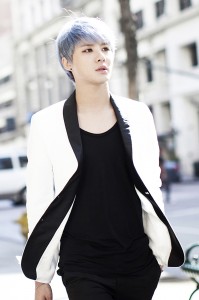 When it comes to K-pop singers singing in foreign languages like Japanese or English, it’s easy to get hung up on pronunciation and how intelligible a song sounds to the listener. At the risk of drawing some antagonism, I’d venture to say that a large part of this is attributed to good old elitism and a need to be constantly critical of the tiniest things. But above all, the overarching reason why pronunciation seems to be the first point of criticism has to do with the listener’s sense of personal comfort. And because this criticism is so inherently tied with our own experience as a listener, pronunciation is usually where the conversation about a K-pop artist singing in a foreign language stops.

But there’s a really obvious facet of singing in a foreign language that I didn’t recognize until seeing the “Uncommitted” video, and that is that a K-pop artist who is not fluent in English will not fully understand the English lyrics that he is singing. Sure, the artist is undoubtedly provided with Korean translations of the English lyrics, but it’s not the same. Furthermore, it’s exhausting to match up a set of English lyrics with its corresponding Korean translation, going line by line, interpreting each word first in Korean and figuring out how to embed that interpretation within words in an unfamiliar language. The idea is to sing unfamiliar English words with the same intricacies of passion and emotion that would manifest themselves in familiar Korean lyrics (which are, in actuality, nothing more than dry translations that convey merely semantic meaning and not emotion). But this is difficult, and in the end, it’s much easier to just give it up and sing the strings of words and letters while trying to sound really emotional throughout the whole song, in the hopes that you’ll get it right somewhere along the way.

This phenomenon makes itself glaringly evident in Junsu’s performance throughout the music video. While it’s not to say that the lyrics of “Uncommitted” are anything profound or meaningful, it does have intricacies that should be expressed with more than one type of facial expression. Throughout the video, Junsu does a great job of expressing emotion, but none of those emotions line up with the lyrics. In the end, you’ve got a really incongruous video where the emotion of the actor does not align with the words of the song, and the video becomes uncomfortable and unsatisfying to watch.

Don’t get me wrong; this isn’t supposed to be a low blow to Junsu’s linguistic abilities because it’s definitely not Junsu’s fault that he’s not fluent in English. Junsu is an amazing performer and he usually does an awesome job emoting when he sings, but when he’s singing lyrics that he doesn’t fully understand, it handicaps him and makes it impossible for him to give his 100 percent best towards his performance. I’m disappointed over the lost potential in this song, and it frustrates me that a mere linguistic barrier is enough to handicap Junsu’s ability to perform at his best. All the elements were there for “Uncommitted” to work: the song was good, the MV was beautiful, and Junsu’s just great — but for God’s sake, why did it have to be in English?

Singers have been singing in foreign languages for ages, and the dilemma of expressing oneself fully through words in an unfamiliar language is one that plagues almost any classical singer. This dilemma is magnified even greater in pop music, where music videos and performances require the artist to act out the lyrics of his song, even if the lyrics are in a language he cannot understand. There are a number of ways that the “Uncommitted” video could have turned out to be an awkward, out of place mess; the inclusion of Junsu, blue hair, English, and ladieeeez in the same video almost guarantees that. But despite these obvious doubts, Junsu managed to make it all work; not even the sight of Junsu grinding up on four different girls made me flinch even once. Junsu and the production staff did everything right in producing “Uncommitted,” but the end product still felt incomplete, incongruent, and unsatisfying — all because of the language barrier. It’s something that’s worth keeping in mind as more and more K-pop artists are producing material in foreign languages. When it comes to foreign language releases, pronunciation is a rather trivial point to pick on, particularly when the linguistic barrier at large is what holds the greatest potential for damage.

Nevertheless, I commend the amount of effort and dedication shown in “Uncommitted.” As aforementioned, the principal fault with “Uncommitted” is something that mostly lay out of the control of artist and staff alike. I don’t doubt that a Korean version of “Uncommitted” would be volumes better, but considering all that “Uncommitted” has done right, there’s enough reason to be happy with what’s been put in front of us.