Snoop Dogg vs. SONEs: The Tweet Heard 'Round the K-popiverse 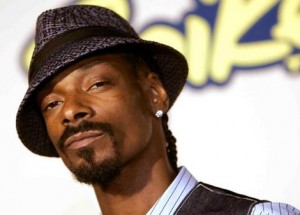 I have to say, it’s been quite a while since I’ve heard (or rather, been bombarded by) any news related to American rapper and producer Snoop Dogg.  Although I technically grew up with Snoop Dogg’s music — he’s been active since 1992, which is perhaps longer than some of our readers have been alive — I was never all that much invested in rap or hip-hop, and so when the news broke on forums that Snoop Dogg had dared to diss Asia’s Greatest Female Pop Act Of All Time, my first reaction was, “Oh, Snoop Dogg?  Isn’t he the guy who sang the theme song from Kenan and Kel?”

But let’s backtrack for a minute and get to the real meat of the problem, which is that Snoop Dogg, for whatever reason, posted this on Twitter on July 8: 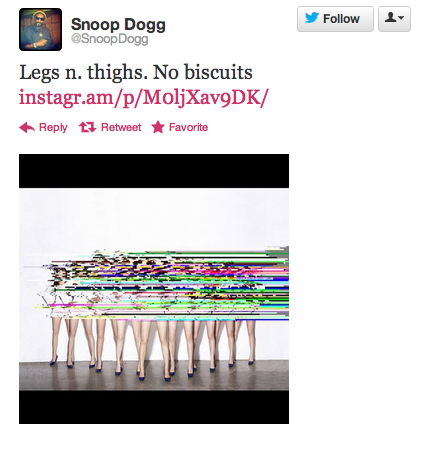 In case you can’t tell, that the jacket photo from SNSD’s second mini album Genie.  And yes, their faces have been blurred out.

The language is colorful, but it would appear — at least to me, and based largely upon intuition + the many definitions that Urban Dictionary records for the slang term “biscuits” — that Mr. Dogg was attempting to convey the sentiment that the ladies of SNSD are endowed with glamorous legs, but suffer from a lack of junk in the trunk.  Which is a still more colorful way of saying that SNSD collectively have no asses.  To which most of the world says: “Well, yeah,” but to which the K-popiverse cries, “Off with his head!” 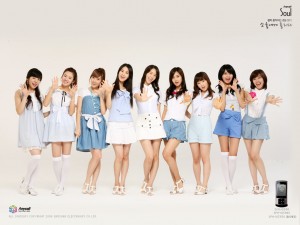 Now, one could easily get offended by Snoop Dogg’s cavalier use of the various components of a Kentucky Fried Chicken deluxe family bucket to objectify the female form — and really, that’s probably not an inappropriate reaction by any stretch.  As a woman, I don’t really like feeling as though my body parts have been reduced to something you order in when you don’t feel like cooking a full meal, no matter how humorous it may seem.  Though Snoop Dogg is by no means a first-time offender, and though some people seem to think that women who don’t like being objectified in public by an extremely well-known celebrity need to get over themselves, I’d put forth that getting upset and vocalizing one’s discomfort is not really a bad thing.

However, as should be obvious, it wasn’t just any women that Snoop Dogg insulted with his comment, it was the ladies of SNSD — and if fans are prone to throw a hissy fit when somebody looks bored on camera or doesn’t bow deeply enough to an industry senior, they are likely going to blow something like this completely out of proportion.  And so they have.

At first, it seemed as though it were just a debate amongst international, English-speaking K-pop fans over what Snoop Dogg really meant — which led to predictably asinine comments claiming that Snoop Dogg is “irrelevant,” or arguing that no one should listen to him since he wears pigtails and giant necklaces (which sounds to me more like Flava Flav, but I digress).  But of course, the Korean press picked up on the story quickly enough, and by virtue of some combination of pretty impressive mistranslation and butthurtism, suddenly fans were shooting down Snoop Dogg for saying that SNSD possesses no charms or beauty other than their incredibly long legs.  Which…even if you don’t know what “biscuits” means in slang terms (and again, judging from Urban Dictionary, it seems like a word that is open to interpretation), is a pretty generous and highly inventive reading of Snoop Dogg’s original comment.

While this is no Tablo-esque witch hunt, the backlash that Snoop Dogg received from what he probably originally thought would be a comical and quickly forgotten Tweet was enough to prompt the rapper to issue not a retraction, but a clarification: ““Today’s lesson. from. Professor Snoop. Biscuits = ugly faces.  My ladies Girls Generation got beautiful faces. Legs n. thighs. No biscuits ‪#ONELOVE‬ & ‪#REINCARNATED.”  Along with this came a second and totally nonsensical photo collage: 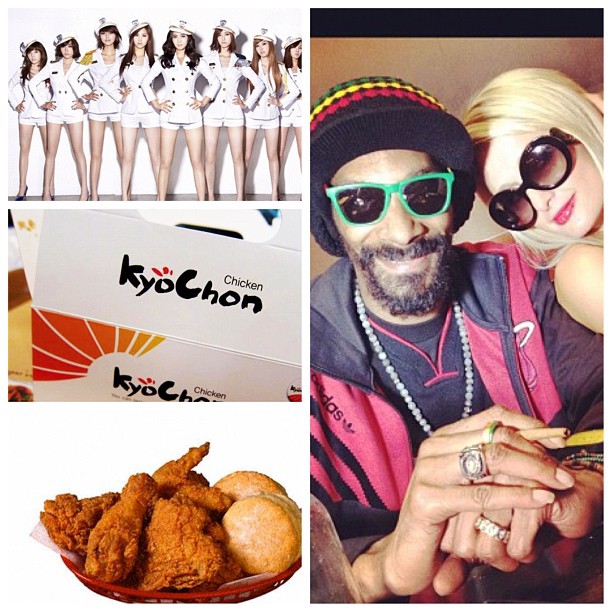 Despite the fact that “Professor” Snoop Dogg makes this claim, not for a second do I buy the fact that “biscuits” somehow refers to “ugly faces” — although if someone out there is more down with the beat on the street than am I, I’d welcome the correction.  However, whether or not Snoop Dogg’s explanation of his somewhat offensive Tweet is true or not, that Snoop Dogg had to issue an explanatory Tweet at all really speaks to the strength of the K-pop lynch mob.

Now, I am not in any way attempting to defend Snoop Dogg; as I’ve already said, I myself am not particularly pleased with his Tweet (despite the fact that it is pretty much true), nor do I really understand what he was trying to accomplish by publishing it (my guess would be “nothing”).  After Teddy Riley was flamed for upsetting Wonder Girls fans on Twitter, Snoop Dogg probably should have stayed far away from any topic related to K-pop on the Twitterverse, and he’s got no one to blame but himself there.  But what I find entirely more ridiculous than the Tweets themselves is the fan machine that rushed to defend the girls against what was ultimately not that big of a deal — and in doing so, managed to turn the incident into a big deal for all the wrong reasons. 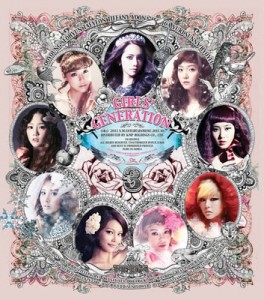 As most fans of SNSD are aware, Snoop Dogg is no stranger to SNSD; he was featured on “The Boys” maxi single release.  This collaborative effort along with his and Dr. Dre‘s appearance at the MAMA Awards could indicate that he, like Teddy Riley, might someday delve more deeply into K-pop and work alongside more artists in the capacity of producer.  However, these sorts of rabid fan reactions are, quite frankly, a turn-off — almost more so than are the actual offenses that spark them.  K-pop fans are so quick to brag about how many internationally-renowned artists are involving themselves in producing albums for Korean artists, but I have to wonder how many of them will continue to involve themselves when the fan culture that surrounds K-pop is so vitriolic and unpredictable.  K-pop already gets so much negative and skewed coverage from Western media outlets, and this really does nothing to help its case.

So what’s the bottom line here?  As per usual, what we have is yet another non-situation-turned-into-a-situation, made one thousand times worse by the involvement of K-pop fans who overreacted and rushed to the defense of their precious, precious unnies — who, quite frankly, probably (definitely) didn’t need such defenders anyway.  While Snoop Dogg’s Tweet wasn’t exactly the wisest Tweet of all time, it almost certainly wasn’t one to get into such a tizzy over.  It’s times like these when I shake my head and wonder how anyone expects people who have no prior knowledge of K-pop to take it seriously.

What do you say, Seoulmates?  Were you offended by Snoop Dogg’s Tweet?