Side B: The Terrifically Other Side of T-ara 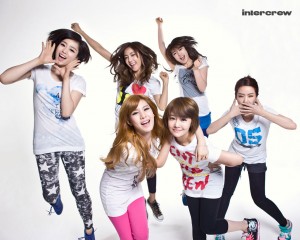 Most of us tend to associate T-ara with those sticky earworms that seemingly repeat the chorus, like “Roly Poly” and “Lovey Dovey” (see, even the titles rhyme!). While these ditties sell, and make for fun listening or just dancing along to, these songs seem to sell T-ara short in terms of talent.

Seasoned fans would probably admit that T-ara, music-wise, are far more versatile and capable than they are usually credited for, usually due to the quality and variation that can be found in the non-promoted songs on their albums which is why we are spotlighting them in this week’s installment of Seoulbeats’ Side B.

With that, it’s worth looking at the songs that show off their vocal skills better, as well as showing that they are capable of far more than catchy tunes.

Without putting too much of a point on it, their debut album, The Absolute First Album was quite aptly titled, being one of the stronger debut albums I have heard in K-pop. At that time, Core Contents Media was pretty bold with some of the marketing decisions they made. Rather than releasing a few EPs first to build up public interest, as well as spread out quality songs over a few releases, CCM chose to put most of their resources in creating one album packed with all the songs that made the cut. Also, at a time where most girl groups were pursuing the cutesy, hook driven sound, typified by SNSD’s “Gee,” T-ara were marching to their own sound, in the form of electro-pop.

The result was a fine mix of sass and edge to grab listeners’ attention, combined with some softness to give the songs an emotional touch. Couple that with production that nicely separated the girls’ voices, making it clear who was singing (and how good the singing was), and what you get are fine pop hits that merit repeated listening.

Of course, there was also the clichéd need for slower tempo songs to prove their singing ability. While T-ara are not exactly the first group that comes to mind where ballad songs are mentioned, it is also worth saying that they do a reasonable job with the ballads on the album.

With such a diverse range of material, it seems slightly unfortunate that the biggest hit that came out of this album was “Bo Peep Bo Peep,” and that was partly due to its (annoyingly) sticky hook. The only other song that was promoted, besides the debut single “Lies,” was “Like The First Time,” which could be best described as a more mature and evolved version of “Gee.” The song certainly did win a fair amount of fans, including Tony An, who managed to get them to perform it “live” at his request on a variety show.

Sadly, after their full-length debut, T-ara began to work more on EPs which focused more on that one hit, together with a bunch of other songs. However, even among those, there were other “hidden gems.” While Temptastic could not be called a T-ara high point, largely due to how shockingly poor the lead single was, there were other songs that tried to salvage the mini-album. For one, there was “Ma Boo,” which featured a more traditional song structure with some quality singing from Soyeon, as well as evidence that Hwayoung can do more than just repeating the same words ad nauseum.

And for those who love their ballad, but one with a peppier touch, there’s “I’m Okay.”

Another non-promoted song  worth mentioning is “Goodbye, Ok,” off the Black Eyes EP.  The song is a mid-tempo guitar and piano driven number, with the singing largely supplied by the more vocally capable members. Despite what looks like pretty average ingredients for a song, what is surprising is how at times, a more traditional approach to composition can work so well for any group.

While these songs may not have gotten the promotion cycles they deserved, at least they have found favour with fans and helped prove that there is much more to T-ara than the earworm.  Thanks for joining us for this week’s edition of Seoulbeats’ Side B, we’ll see you again in two weeks on the flip side.