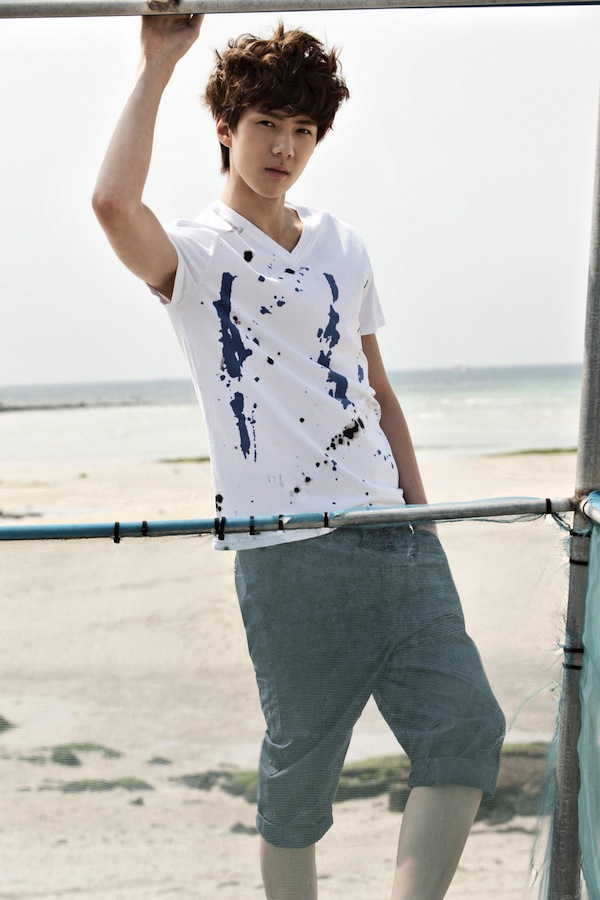 Calvin Klein Jeans recently announced that a trio of member from rookie group EXO-K would feature in the upcoming June issues of both GQ and Vogue Girl. Sehun, Baekhyun and, of course, Kai were chosen for the pictorials and were fully wardrobed in the globally-recognized fashion brand. This pairing should come as no surprise to EXO fans considering Calvin Klein and the boy group go way back –all the way to March– for their first solo photo shoot. At that time all of the members of EXO-K featured in the Calvin Klein-filled spread for High Cut magazine, modeling the label’s new double indigo jeans. The company obviously liked what they saw the first time around, so the boys are back again for all to enjoy in their casual denim glory.

Nothing says summer like sand and surf, and that is exactly what this shoot by renowned fashion photographer Moke Na Jung captures. Sehun dons a paint-splattered tee and long, cuffed shorts against a pristine beach backdrop. Kai gets a little more friendly with the sand, lounging around in another of the brand’s t-shirts from their Spring/Summer 2012 collection. His is paired with light-wash jeans, a color referred to as “nightshadow” by Calvin Klein. While his lace-up boots aren’t exactly beach-worthy footwear, they are quite awesome kicks, and he can make sure he doesn’t miss dance practice by checking the time on his CK Biz watch. You can bet money that little bit of elastic peeking over the waist of his pants is from Calvin Klein underwear, the bread and butter of the company’s advertising campaigns for decades. 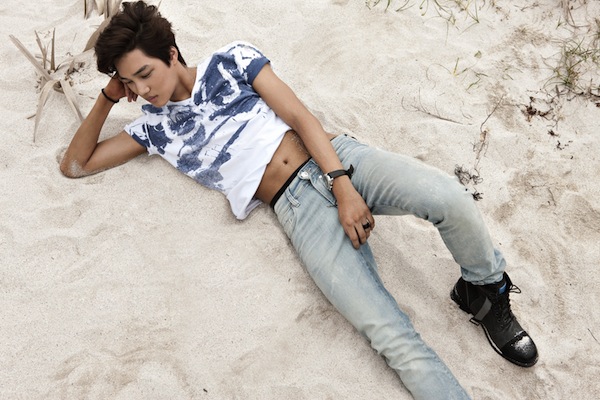 Infringing on other members face-time as only he can, Kai and his Calvins (and not much else) show up again to skateboard with Baekhyun in a palm tree-lined parking lot. Baekhyun looks cool in his shorts and graphic tee, even if he’s playing second fiddle to someone else’s abs. Both boys sport the brand’s high top sneakers.

They all finally come together for a group shot in the above featured image that shows a variety of different styles. Starting with Kai on the left, we see a pale green polo with dark wash jeans along with the same watch and sneakers seen previously. Sehun looks somewhat monochromatic in his look. His faded khaki green tee and pale denim is worn with sneakers for a simple style. Baekhyun’s printed blue shirt looks great with contrasting denim pants; he too wears high tops once again. 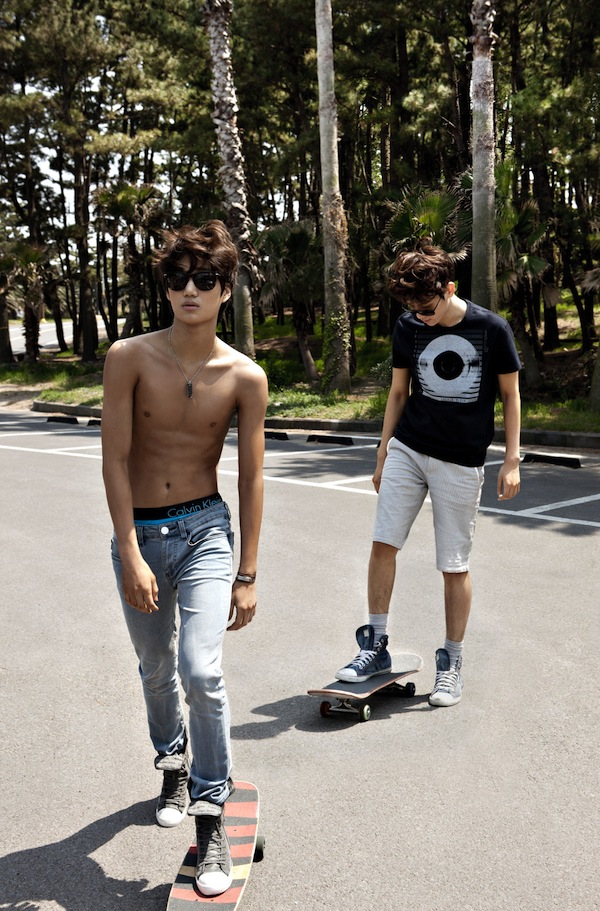 These photos are just a sample of what is to come, so make sure to check out the rest of the shots from GQ and Vogue Girl when they are released.

Which shot is your favorite so far? Are you disappointed that only three members participated in the shoot?