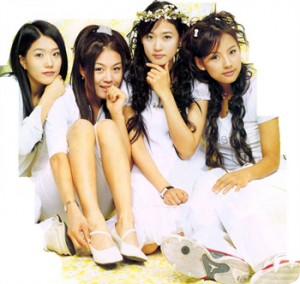 One of our staff members, Johnelle, requested that I cover Fin.K.L for this week’s K-pop Vintage, so you know what: I’m going to give you Fin.K.L. The acronym and meaning of the group’s name is interesting to say the least. Fin.K.L means Fine Killing Liberty (and you think the names of today were bad) and if you have any idea what this means, please let me know. Perhaps it is pointing towards the end of the oppression of freedom?

Personally for me I was more of a S.E.S fan, but there are some songs that I do like from this group. Fin.K.L consists of 4 members: Sung Yuri, Ock Ju-hyun, Lee Hyori, and Lee Jin. Since I had/have a thing for the underdogs of the company, my personal favorite member of the group is Lee Jin. Today most of the people know this group because of Lee Hyori aka the K-pop sex goddess, but back then when the group started, she was just the pretty girl.

Here’s a bit of the history behind Fin.K.L:

Fin.K.L debuted on May 26, 1998 with their album Blue Rain, as well as their first single with the same title. Most people remember Fin.K.L for their cute concept, but their original concept was more R&B style, complete with the baggy 90’s clothes style. Lee Hyori also used to be a really good singer (something I had almost forgotten). A few times I didn’t even know the difference between her voice and Ju-hyun’s. Not saying Lee Hyori is now a horrible singer by any means, but these days she definitely isn’t using her full potential.

After “Blue Rain,” the group promoted “To My Boyfriend.” This is actually one of my favorite Fin.K.L songs, and it also happened be their first #1 hit. I like this song mainly because the call part is so catchy, and besides, when else do you get to see Hyori being this cute? Everyone and everything in this music video screamed cute: The anime hairstyles, the extremely bright backgrounds, the bubbles, the photo-booth feeling, and the members themselves as well.  Their last promotional single from the album, “Ruby” sent Fin.K.L back to its ballad/R&B roots. Personally I think it was a little boring, so I don’t have much to say about it. As for the album itself, “Blue Rain” sold more than 400,000 copies.

Fin.K.L released their second album titled White on May 13, 1999. White placed less emphasis on ballads and more on dance songs. Their promotional singles for this album were “Forever Love” and “Pride.” I know for a fact that “Forever Love” was on Pump it Up, and it’s one of my favorite songs from Fin.K.L, as it has a fun 90’s vibe. I personally liked this album because although I like ballads and all, after a while my attention span significantly decreases. It seems that the general public liked this album as well because White sold over 700,000 copies.

On November 24, 1999 FinK.L. released their 2.5 album SPECIAL. For those that do not know what a .5 album is, a .5 album is like a mini-album, but usually with a special theme or a cover album. For this album there were no music videos, but even so, Fin.K.L managed to sell more than 340,000 copies.  Because this special album was released during the wintertime, Fin.K.L went with a winter theme and promoted on music shows with “To My Prince”  and “White.” For the “White” performances, there would be fake snow to match the winter feeling of the song. This album as well as their first album helped Fin.K.L secure two Daesangs in the same year from the SBS and Seoul Music Awards. This was a major success for the girls and finalized their status as K-pop stars.

The next album titled Now was released on October 6, 2000. The main track for this album was also named “Now.” For this album, their concept changed from their previous cute image into maturing women.  As for the music video itself, I must say WTF who holds a camera like that? And along those same lines, who plays racing games like that? If you play video games or hold a camera like Fin.K.L does, then you must be one interesting person, or you have no idea what you are doing. I wasn’t sure if this was supposed to be a commercial for a house or some detective thing going on. Each of the members explore the house: Lee Jin is playing video games, Ju-hyun is recording a video, Yuri is eating peppers, and Hyori is on a bed. Then some dude comes home, and they all start running towards each other. I was just left confused on what was going on. Aside from “Now,” Fin.K.L also promoted their second single “Feel Your Love,” but only for a brief time.  This album sold a little more than 450,000 copies.

On April 13, 2001 Fin.K.L released another .5 album, but unlike the last .5 album, this album focuses on covers. This album’s tracklist consisted of remakes of famous hit songs from the 80’s and 90’s. The album was interesting in the sense that most K-pop albums generally target teenagers, but for this special album Fin.K.L decided to target young adults. Even the music video had a twist. Their title track  was a remake of Hye Eun-yi’s 1981 hit “You Wouldn’t Know.” The special album sold over 250,000 copies.

Fin.K.L released their last studio album on March 8, 2002 titled Forever with their last #1 hit “Forever” being their title track. The music video would be something MOGEF would be going ape…crazy over. The beginning of the music video was innocent enough, with a bunch of girls playing around, and then making a time capsule. Unfortunately, their futures weren’t so innocent, and in fact it was downright depressing what happened to them. Yuri became a prostitute, Hyori kicks a guy in the balls and loses her finger, and Lee Jin is a suicidal smoker and alcoholic. Ju-hyun got the tamest one being a sick lady, but still if this music video was released in today’s time, it would have definitely been banned. Nonetheless, “Forever” is arguably my favorite Fin.K.L song ever. The group also briefly promoted with “Don’t Go Away.” This was also the time when I started following Fin.K.L in real-time, but unfortunately that was fated to be short-lived. 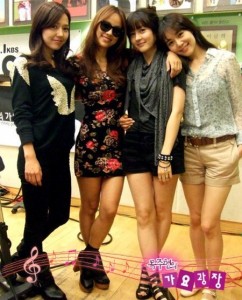 Since then, Fin.K.L has not made a studio album, but they did come back for a digital single titled “Fine Killing Liberty,” which didn’t chart due to the lack of the promotions. After that, the group members went their separate ways. Yuri became an actress and has been in dramas such as Bad Girls and A Love for A Thousand Years. She has also won awards for her performances in One Fine Day and Snow Queen. Lee Jin became a variety star on the popular show “X-Man,” but ever since she left X-Man, she has not had much activity going on. The most recent thing she has done is been in the variety show Heroes in 2010. Ju-hyun became famous for her weight-loss. During the early days, she was known as the chubbier one in the group, so people were impressed when became fit. She credited her weight loss to diet and yoga, and has even opened up her own yoga studio. Ju-hyun also released a few albums (her first solo album is a must-listen!).

As for Hyori, I think we all know what she’s been doing. She has released several albums, been on Family Outing, and even has her own talk show. Hyori might have not have had the best ride with her controversies from the sex scandal with Rain to her plagiarism scandals, but she’s still going strong.

Fin.K.L has made an impact in the K-pop world, and the impact is still seen in today’s pop culture. In fact, there are several idols including the Wonder Girls that have covered Fin.K.L’s songs. So is the group still together? The answer: no idea. All the members have left DSP and gone to their respective companies, but have not made any confirmations that the group has broken up. Until then we are just going to have to wait and see. Who knows, they just might pull a Shinhwa on us!

Do you guys remember Fin.K.L? Have any requests? Feel free to comment below. Lastly I want to mention that K-Pop Vintage is changing from a weekly thing to being a biweekly thing, but I hope you guys like this segment!