One of the most attractive things about K-pop is how visually appealing it is. When you watch a performance, you’re not only entranced by how fun or powerful it is but also by how pretty it is. Cute gestures, smoldering looks, sparkles, sequins, and skin-tight revealing clothing can add a little something extra to a performance. So I, upon realizing that, decided to go on a hunt for the absolute best stage outfits K-pop has had. Going by group, I’ll start with my favorite-ever K-pop fashionistas, SNSD. 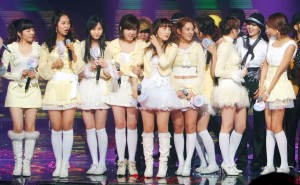 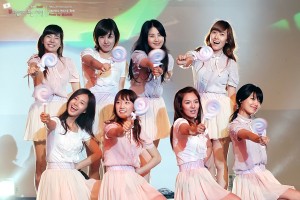 Let it be known — SNSD has not always had great stage outfits. Many times in the past, their outfits have been hit-or-miss. Sometimes they’d wear something adorably cute, other times their outfits would be horrendously cheap-looking, covered in sequins or glitter or having no originality at all. Throughout most of 2011, SNSD wore very basic, boring stage outfits. Then, after “The Boys,” SM suddenly decided to go all-out for SNSD’s performance outfits, perfecting their makeup to a T and taking the time to create clothing with style and quality. But that isn’t to say that all their outfits prior to “The Boys” were bad. To be honest, I sort of liked the cutesy, feminine outfits the girls wore back in the “Kissing You” days. But many of the outfits SNSD wore in previous eras were very basic and overly matchy-matchy, like the simple jeans and shirts worn during the “Gee” era, and the typical white blazer and shorts combo worn for too many performances to count. 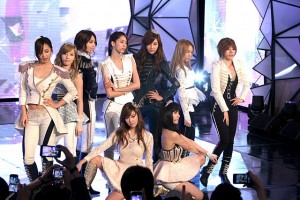 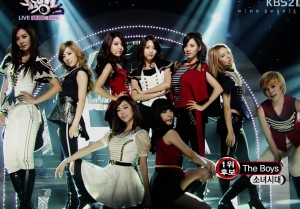 As a recap from my last “The Boys” stage outfits article, I absolutely loved the outfits SNSD wore for “The Boys” promotions, the left-hand picture above being my absolute favorite set. These looks were the most distinctively feminine, using lots of lace, tiaras, and pale colors to create a princess-y look. Most of the girls wear tailored pants and structured blazers, complete with lapels and buttons, to better resemble royal guards or equestrian riders. Tiffany and Jessica, however, wear dresses. Tiffany’s dress is flared out at the waist and shorter than Jessica’s A-line lace dress. It’s really hard for me to choose a favorite but I believe that I love Yoona, Sooyoung, Tiffany, and Jessica’s outfits best.

I also love the outfits on the right, which I like to think of as “The Nutcracker” outfits, simply because they remind me of The Nutcracker play and nutcrackers themselves. The outfits are all uniquely different with the color scheme of red, navy, and white pulling them together. Like always, Jessica was in a dress and Tiffany wore a top flared out at the waist. Yuri’s asymmetrical top was a cool and modern touch while Yoona’s outfit isn’t all the different from the one she wears in the right-hand photo. 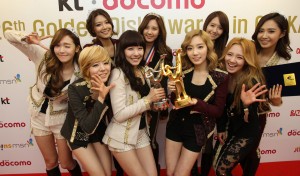 But I already talked about the outfits worn during the beginning of “The Boys” promotions plenty so now I’m going to move onto newer outfits.  For “The Boys,” SNSD often wore suits of different styles. Sometimes the suits would be normal, regular, steamlined suits and other times they’d be bedazzled with sparkling jewels. For a few performances around the beginning of 2012, SNSD wore these pretty gold-lined suit-like outfits, seen on the left. These outfits actually call back to the white blazers they’ve worn since their “Genie” promotions but are better because of the color palette. I love deep red and cream, OK? They look gorgeous together. Those colors added to the gold and dark green give these outfits a more mature look. Yuri’s outfit was actually my favorite, though not clearly seen. On the right are the set I like to call “Blue Royal,” because they’re blue and white and have regimental influences. Alright, so I know that SNSD actually did wear these outfits early on, once I believe, in their “The Boys” promotions, but I had not mentioned them in my last article and these outfits were worn again at the end of January, making them more relevent to this article. The looks follow the basic rule of most of the others: Jessica in an A-line dress, Tiffany in a let-out-at-the-waist top plus shorts, and the rest in blazers and pants. 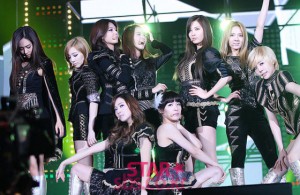 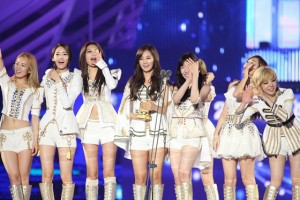 It wasn’t long until SNSD returned to their usual uniformity, but even when they did, SM still put uniqueness into every outfit for the girls. Their black-and-gold outfits have a more geometric design, with sharp zig-zags and embroidery all over the clothing. SNSD wore these black outfits several times throughout January. Their white outfits, seen right, were worn a variety of times throughout December of last year, beginning at the MAMAs. Of the two, I prefer the white outfits because of the pretty bedazzlements. Hyoyeon’s outfits looks exceptionally tiny, though. 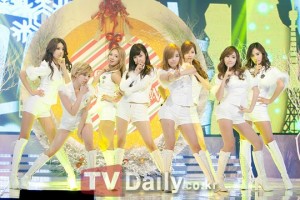 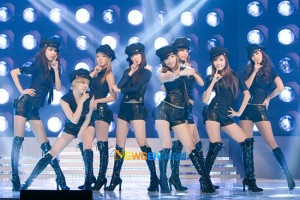 For a short time in December of last year, SNSD promoted the Korean version of “Mr. Taxi.” When doing this, they reverted back to their same old over-the-knee boots and matching outfits, and as much as I disliked this, I still find their costumes cute. Okay yes, the police-inspired looks on the right scream “fetishized,” but that didn’t stop SNSD from looking hot in those patent leather outfits. In their crisp white outfits on the left, SNSD looked adorable. Usually, I dislike it when K-pop costume designers decide to add random bits of fluff to clothing, but the fluffy touches on SNSD’s looks were actually rather cute. 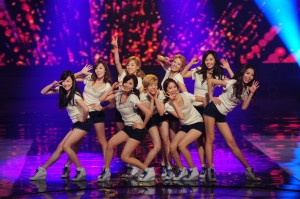 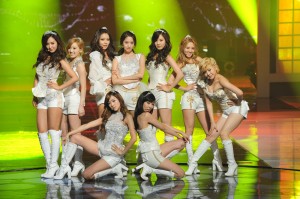 During the Gayo Daejuns of last year, SNSD wore these equally charming outfits.  The first were worn for a special performance and are cute because of how simple and innocent they are. These sweater-and-shorts combo call back to SNSD’s earlier days, and the sweaters look unbelievably plush and I want one. SNSD also wore bridal-inspired outfits during the Gayo Daejun. The bodices were covered with beautiful applique and embellishments, and with their customary tiaras, SNSD looked like actual princesses. 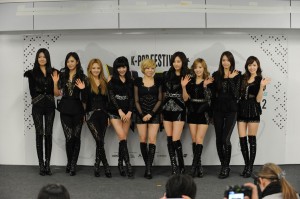 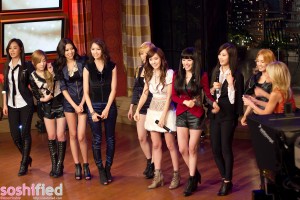 SNSD’s last awesome stage outfits up to this date are the ones they wore for Letterman and Live with Kelly. The black lace costumes were sleek, stylish, and sexy; they were also worn for the K-pop concerts in France back in February. The outfits SNSD wore for Live with Kelly were actually worn in their music video for “The Boys,” but are so cute that I wanted to mention them anyway. I love Jessica and Tiffany’s outfits most but love how long Sooyoung’s legs look in hers.

These are my all-time favorite stage performance outfits SNSD has ever worn. Between this article and this one, which of SNSD’s outfits are your favorite? Please stay tuned for further installments in my Best Stage Outfits series! SNSD aren’t the only ones that know how to rock the stage!