K-pop is highly gimmicky, every new song and album requiring the idols to don a new look to stay current. This isn’t true for all idols, 2NE1 being a good example of how some groups stick with a signature look or theme. But many idol groups play around with concepts to add further style and intrigue to what they’re promoting. With the release of MBLAQ’s newest mini-album and music video and with the latest roundtable, my attention has been brought to dark concepts.

Every idol group to my knowledge has had a period where they’re thrown on some black clothing, leather, and excess amounts of eyeliner to evoke a feeling of angst. In contrast, almost every idol group has also worn brightly colored clothing and cheerful smiles to embody just-as-popular cute, aegyo concepts. Dark concepts and aegyo concepts are the most common ones for idols to use, to the point that they’ve become expected and almost repetitve.

What I’m wondering is which one fans like best. So let’s go through some contrasting concepts groups have put forth in the past and evaluated which one which are better simply on how the concept was executed, styled and embodied by the group. 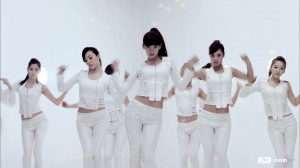 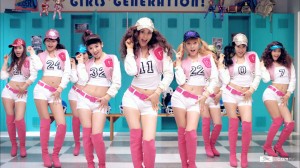 SNSD is a good example of a group that uses contrasting concepts because they did it intentionally. “Oh!” was a precursor to their darker concept, “Run Devil Run,” the music videos going along with each other to explain this. In “Oh!” the girls are cute cheerleaders that accidentally unleash darker versions of themselves by breaking their computer.  This leads into “Run Devil Run” which is completely opposite of “Oh!” in appearance.

“Oh!” was filled with bright colors and pseudo-sexual cuteness while “Run Devil Run” was darker and sexy. Comparably, I prefer “Oh!” more. I love the bright color palette and shamelessly adore the outfits and hairstyles and everything. The pseudo-sexualness of it I do not love. Here the girls are portraying cutesy high school girls singing about loving their oppas, and yes, this concept had a pedophilic feel about it.

“Run Devil Run” was sleeker, classier, maturer, sexier, but because I’m easily distracted and entertainted by bright colors, I prefer “Oh!” more. Furthermore, I like SNSD but they don’t embody attitude or even sexiness that well. This is also true for “The Boys” and “Bad Girl,” wherein the girls were required to bring more attitude to the table but couldn’t completely. They feign it without actually feeling it. The girls are just too sweet and don’t seem to know how to bring the darker part of themselves to the surface. “Run Devil Run” was nicely delivered, regardless, and I would argue that “Run Devil Run” has a little more sass than either “The Boys” or “Bad Girl.” They made somewhat believable femme fatales. But they did pull off “Oh!” better. 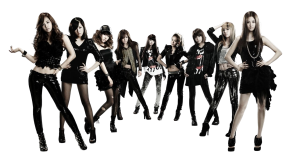 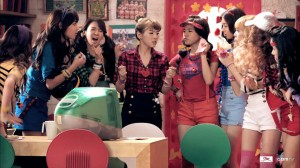 I read in an article at Soshified that Min Hee-jin, SM’s visual directing team leader, chooses outfits by “matching them with the first image she’s struck with after hearing the song”. She thought of cheerleaders after hearing “Oh!” and Jessica Alba’s character in Sin City after hearing “Run Devil Run.” The connection to Sin City does make “Run Devil Run” more interesting for me but I still like the outfits in “Oh!” more.

In the beginning, the girls are all wearing cute outfits in bright solid colors, plaid and striped shirts and short shorts pulling their looks together. I also loved their cheerleader outfits, in fact I liked all the outfits in “Oh!”, but I only like one of the outfit sets in “Run Devil Run,” which was the set of casual clothes. 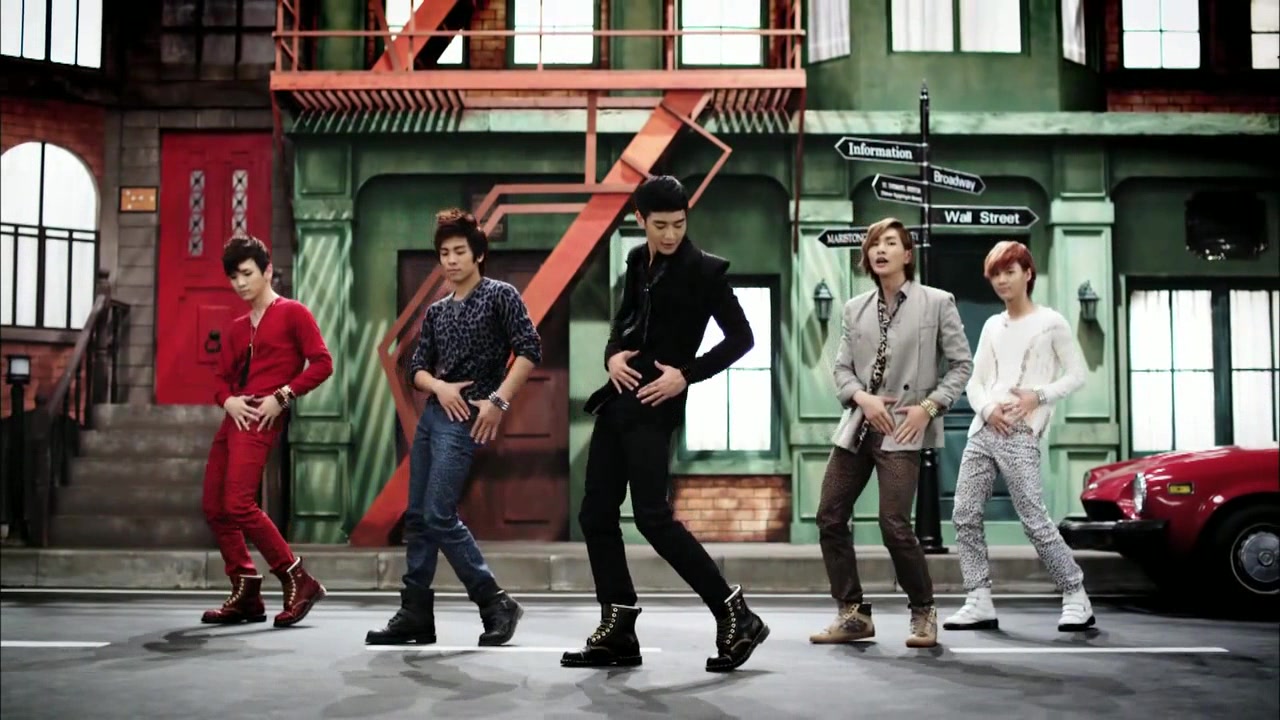 For SHINee, I’m going to contrast “Lucifer” with “Hello.” “Hello” isn’t like other cute music videos where there’s an obnoxious amount of color and fluffy motifs (hearts, stars, etc.) but it’s still adorable. It’s more simple-adorable. The boys pout and giggle and wink in usual aegyo fashion but their plain clothing tones down the charm and makes it more natural. This is a little different because usually clothing is used to emphasize the concept, such as in “Lucifer.”

In “Lucifer,” the boys wear their usual skinny jeans but with some leather and metallic details. The styling in “Lucifer” is a little questionable but it’s SHINee – what else can be said? I keep side-eyeing Key’s cowboy boots and haircut whenever I watch the MV, as well as all the leg gear. But it isn’t as bad as the Japanese version, wherein Taemin swears a small black leather party hat and large amounts of pink lipstick. 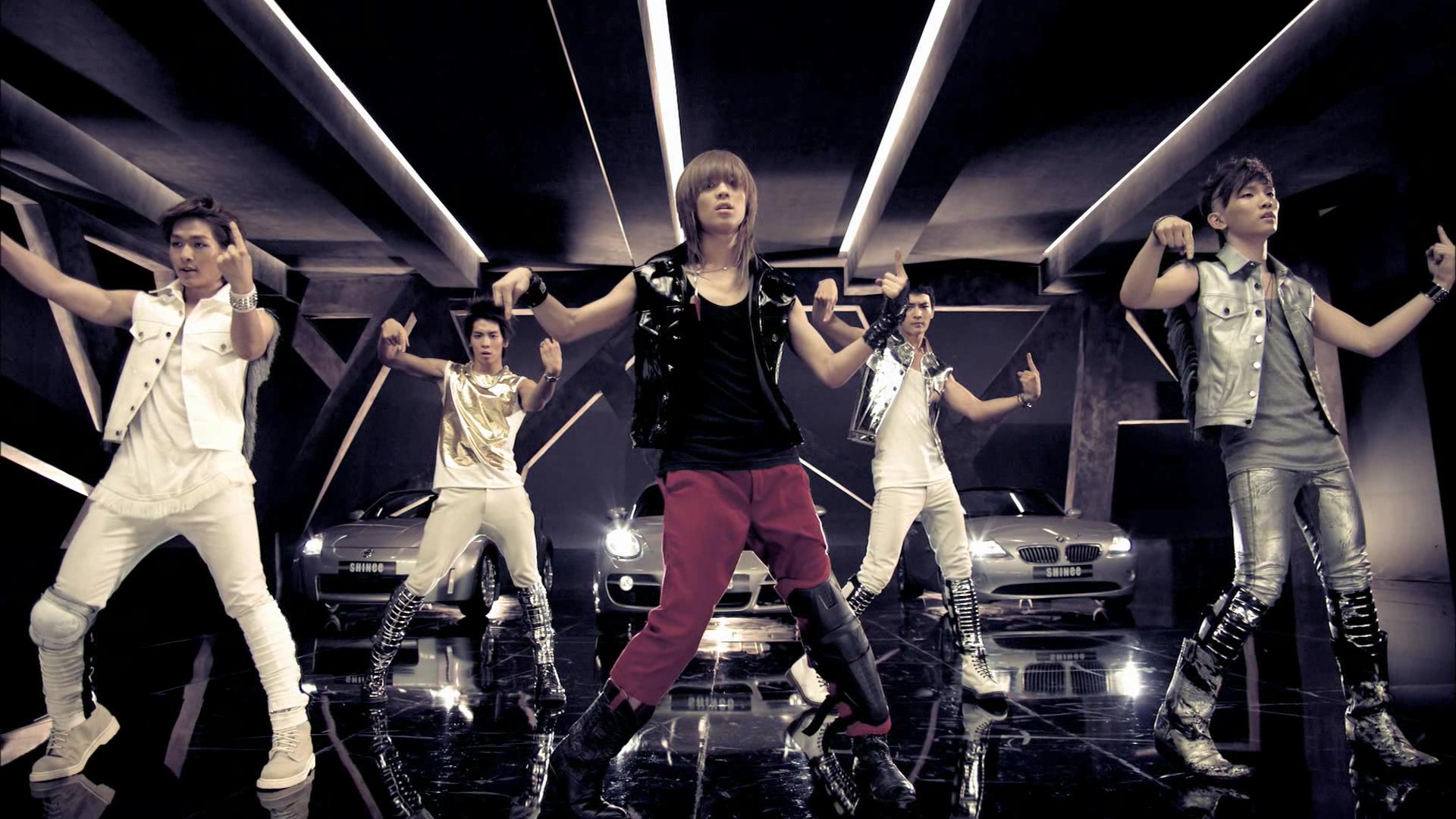 I somewhat prefer “Lucifer” to “Hello,” largely because these days SHINee should be done with cuteness and instead focus on more mature concepts (cross fingers for their comeback!) It’s just starting to get weird seeing men of Onew and Jonghyun‘s ages making puppy-eyes at the camera. The boys are sexy and masculine enough to pull off mature concepts – even the aegyo master Taemin. Taemin’s all cute and smiley until he starts dancing, then he becomes a sex pot. I don’t think SHINee delivers cute as well as they do sexy, so darker concepts are a go for them. 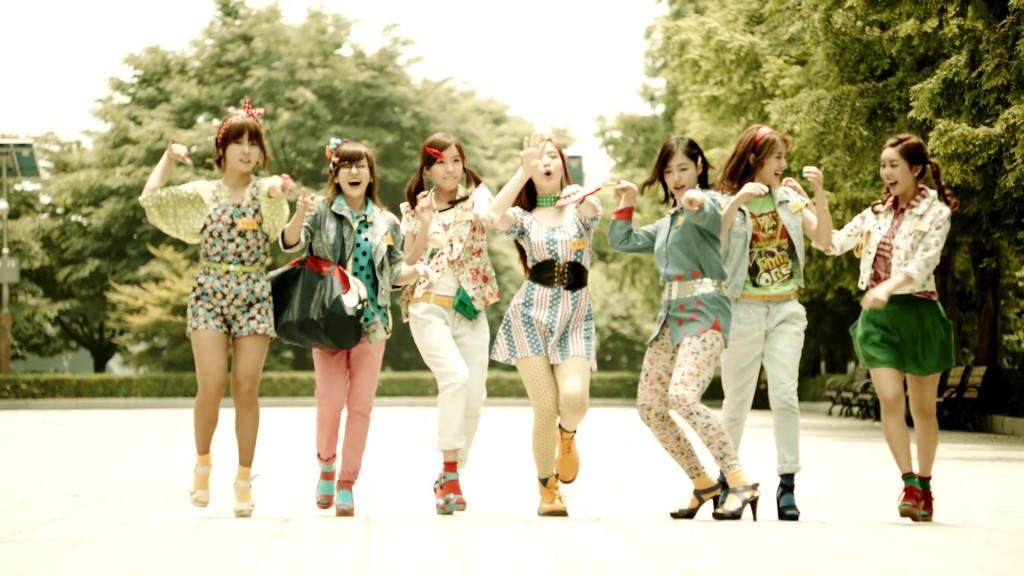 Naturally, I’d have to compare “Cry Cry” with “Roly Poly“. “Bo Peep” was also cute but too sexual to properly fit into the aegyo concept. Being earworm-y and cute, “Roly Poly” was one of 2011’s biggest hits, and all in all, 2011 was a pretty good year for T -ara. To follow-up “Roly Poly” was the darker up-tempo ballad “Cry, Cry,” which was entirely opposite of “Roly Poly” in nature. “Roly Poly” was  a cute, disco song that had cute clothing and aegyo galore while “Cry Cry” was darker both in clothing and concept.

Throughout their career, T-ara has jumped around with concepts and sounds, making it so they don’t have a definite look or sound. You can’t automatically label them as a cutesy bubble-pop group nor as a smooth and sexy ballad group. Because they’re not anchored to a single song or concept like, say, SNSD, it’s easier for them to pull off different looks. SNSD will forevermore be thought of as the adorable girls that released “Gee” and “Oh!” moreso than “Run Devil Run,” so people will always second-guess their attempts at maturer concepts. Luckily for them, T-ara doesn’t have this problem. They can pull off dark and cute concepts with an equal amount of aplomb. 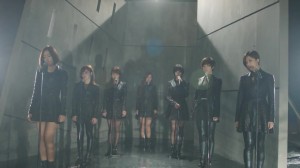 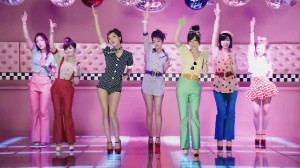 I’m going to go ahead and flat-out say that I prefer the styling in “Roly Poly” than in “Cry Cry.” My lovely associate Jessie already shared her thoughts on the fashion in “Cry Cry” and her thoughts on “Cry Cry’s” style are pretty much the opposite of mine. I didn’t like the excess amount of eyeliner, nor the leather, nor the haircuts. They relied too much on their outfits to convey that they’re bad girls, more than their attitudes. And I loved the styling in “Roly Poly” because of the cutesy, vintage outfits, the mixed prints and the sunglasses. The execution of both concepts were both pleasant – the drama-like MVs were different, if a bit sentimental and cheesy. I always love a good storyline to go along with a song. I appreciate how T-ara is more ambitious than most K-pop groups, trying new things, even if those new things are overly long music videos with somewhat confusing plotlines. 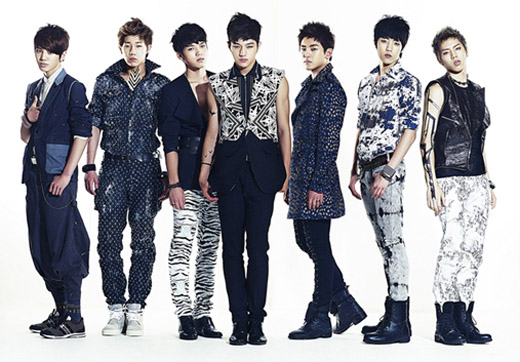 As I’ve mentioned before, some groups stay with a consistent theme or image, twinging it a bit to keep it relevant but never so much that they’re doing something new. I’ve only known Boyfriend to be cute and Brown Eyed Girls to be mature and sexy. f(X) is known for being colorful and crazy in their styling and INFINITE has always stayed with a consistent look and sound, not really doing concepts. All of these artists never needed to completely change their image to become popular and loved by fans. 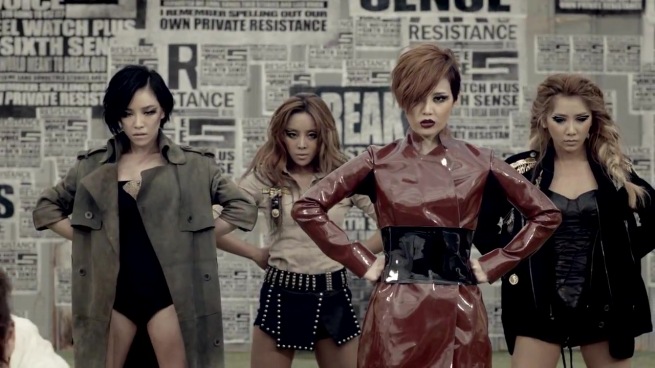 Brown Eyed Girls shows that you don’t really need to change your look to form an entirely new concept. Both “Sixth Sense” and “Cleansing Cream” had entirely different concepts yet the same feel about them. They were though-provoking and sensual. I would say that Brown Eyed Girls would fall more into the dark category of concepts because they always work with more mature themes and topics than loving your oppa. I’ve noticed that Brown Eyed Girls is a favorite of older international fans who aren’t swayed by the cuteness of other girl groups. 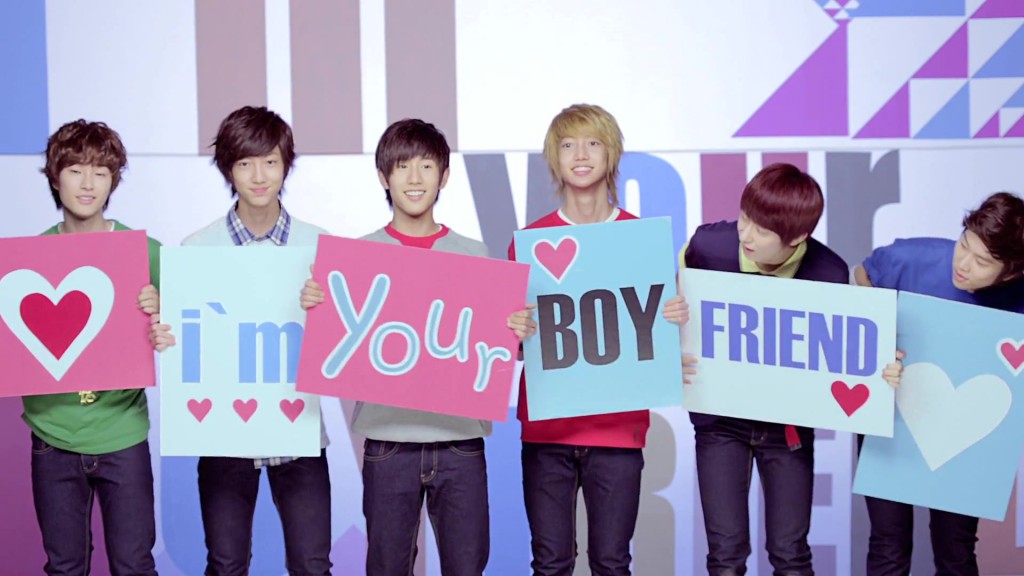 Maybe it’s not fair for me to include Boyfriend in this article because they are a new band and haven’t had a lot of time to change their image. Beyond pretty boy-loving fangirls, I haven’t seen Boyfriend get a lot of love from K-pop fans. This could partly because the amount of talent they have and their material, but also because of their appeal. People just find Boyfriend to be too cute and cheesy, overworking the aegyo and not really worth a second glance.

In contrast to how Brown Eyed Girls are beloved for their darker concepts, Boyfriend is looked down upon for not being mature enough. From this standpoint, you’d think darker concepts would be more popular, at least with international fans, but idol groups still shoot to fame through catchy and cute concepts and music. Though loved on this blog, Brown Eyed Girls does not have the amount of popularity some of its fellow idol groups do. The girls aren’t gimmicky enough. 2NE1 is more mature as well but pretty much everything about this is a gimmick. They’ve with the same crazy, punky, girl-power gimmick since their debut, not being cutesy nor being sophisticated like BEG. 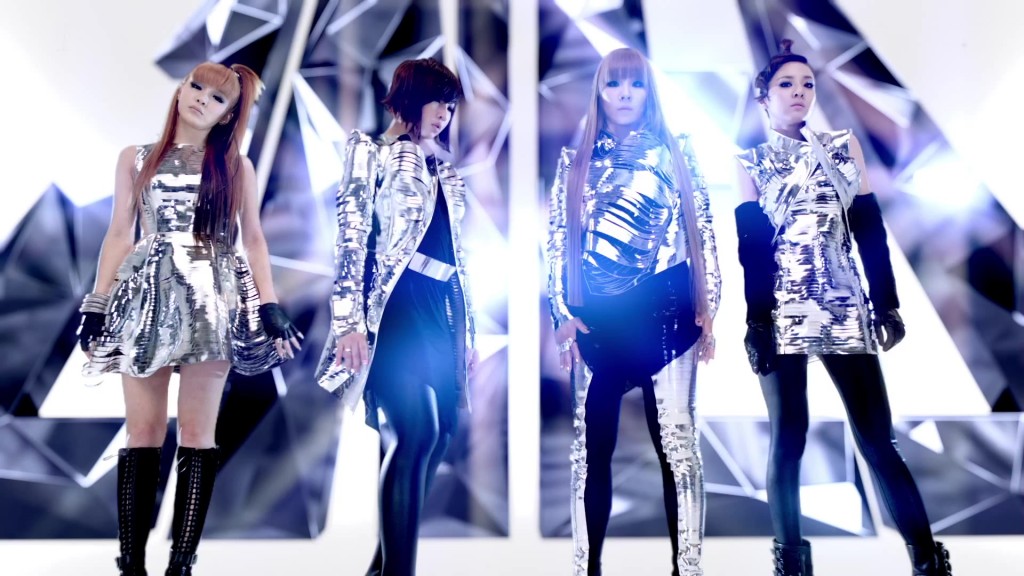 Honestly, I prefer darker concepts. Cute concepts are good for eye-candy but are rarely substantial enough to leave an impact upon the listener. Besides, cute concepts typically come equipped with earworm-y songs like “Oh!” and “Roly Poly,” songs that I’d prefer in smaller quantities and without so much pep and autotune.

Darker concepts bring more emotion and attitude, adding to their appeal. Often times, idols get the best opportunity to show how they’ve grown through the heartfelt songs that come with darker concepts. Cute concepts have songs that are an idol’s ticket to fame (“Gee,” “Roly Poly”) but dark concepts have better songs (“Run Devil Run” > “Oh!”, “Cry Cry” > “Roly Poly”). So even though I like looking at cute concepts more, I’d prefer to watch and listen to dark concepts.

Which do you prefer, dark concepts or cute concepts? Which do you think idols work better?