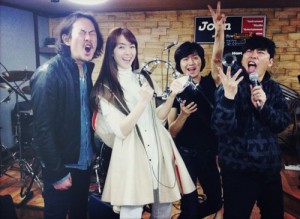 This week’s K-pop Indie Gem presents one of South Korea’s most influential alternative rock bands, Jaurim. The band consisting of members Kim Yoon-ah on vocals, drummer Goo Tae-hoon, Kim Jin-man on bass, and guitarist Lee Sun-kyu met while performing in the areas surrounding Hongik University in 1997. They formed under the name Ugly Duckling, but soon after changed their name to Jaurim which roughly translates to ‘purple rainforest.’ They gained notoriety with the song “Hey, Hey Hey” which was featured on the OST for Man Holding Flowers.

Jaurim is known for their musicianship, intricate arrangements, and the awesome versatile vocals of lead singer Kim Yoon-ah who is also a talented composer. They dip into psychadelic rock with their third album, 2000’s The Wonderland and the song “Magic Carpet Ride.” Check out the MV for “Magic Carpet Ride” which reminds me a lot of the B-52s.

In 2007, Jaurim collaborated with Drunken Tiger in the remake of their song “Loving Memory” for MTV’s Stop AIDS/Spray Love campaign for AIDS research. The song and MV reflects the feelings of isolation that someone with AIDS deals with. It’s a beautiful song and MV with a Latin feel and some Mexican horns. Kim Yoon-ah transforms her voice to match the song with rich and sultry vocals and Drunken Tiger is epic as usual.

In their repertoire, Jaurim has eight albums, three unofficial albums, a concert album, several OST appearances, and a couple of solo albums.  Their most recent album 음모론 (Conspiracy Theory) was released in August of this year, it’s title track was the song “IDOL.”  The song gives voice to idol fans against those that ridicule them and explains their reasons for enjoying the idol experience as a way to free them from a reality filled with disappointment and pain.  The song is deeper than it sounds.

Jaurim was up for the 2011 MAMAs for Best Band Performance for “IDOL” against Jang Kiha and The Faces, FT Island, and the eventual winner of the category, C.N. Blue. Jaurim began their latest live national tour Never Die on December 3rd at the Daegu Exhibition and Convention Center (EXCO). They were trailblazers of the Korean alternative rock scene for the past fourteen years and led the way for many of the newer bands of the genre in South Korea. If you’re feeling a bit alternative, be sure to give Jaurim a listen.