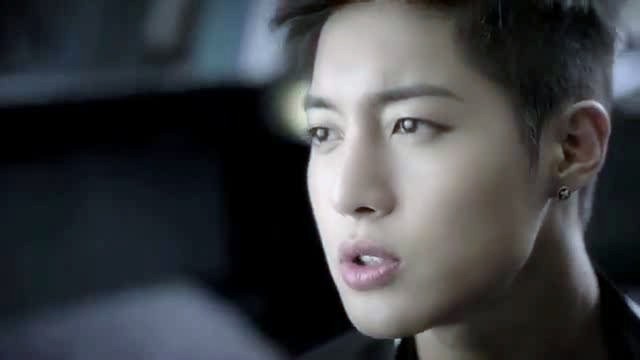 don’t hurt us, or rather our ears.  Those were the first thoughts that I had when I heard that he was coming out with a solo album even though I’m a fan.  Actually, a huge fan of Kim Hyun-joong, he’s probably one of the main reasons I got into Kpop.  If you didn’t already know, my history went like this:  JoongBo on We Got Married > Boys Over Flowers > Kpop addiction.

While I am a fan of Hyun-joong, even got a calendar of his on my desk at work to the horror of my male co-workers, I am also a rational fan.  Yes, I loved him in Boys Over Flowers, but I also know that he wasn’t the greatest actor, but wasn’t Ji-hoo supposed to be stone-faced? His performance in Playful Kiss was better, but if it wasn’t for the delightful performance of  Jung So-min I’m not sure if I would have kept watching.  Ah, who am I kidding I would’ve kept watching.

As far as his role in Kpop as the leader of SS501 he was the face of the group, not the voice.  His previous solo songs “Thank You” and “Please Be Nice To Me” were honest efforts, but weren’t great songs.  Kim Hyun-joong at his best in my opinion has always been when he was playing his guitar and this performance of “Because I’m So Stupid” at his Goodbye Yoon Ji-hoo fan meet has got to be one of his best vocal performances.

So, as a fan I was anxiously awaiting Hyun-joong’s next project after the completion of Playful Kiss, but an album?  His new agency KeyEast Entertainment said that they would support Hyun-joong to the best of their abilities, but they are known for the management of their acting talent, not so much for musicians.  So, it was with trepidation that I watched the MV for his first released song, “Please.”

In anticipation of the release of his solo album, the MV for the song “Please” was released.  The song is a sad one speaking of the betrayal of love which was carried over in the darkness of the whole song and its color palette of black.  Actress and label mate Kim Min-seo portrays Hyun-joong’s ex-love who was a cheater, a liar, and a killer of their love yet he still misses her and laments over the loss …  Yeah, I just don’t get it, get it.

Thankfully, the song is actually pretty good and it matched Hyun-joong’s vocals well.  I think that he is actually a decent singer, but his vocal range isn’t that great so as long as the song plays to his strengths and range, it can sound good.  I also liked the orchestration of the song with the piano playing the main melody and the strings that helped to add to the emotion of the song.

What I didn’t like about the MV was Hyun-joong’s styling and the choreography.  The biggest offense, were his clothes during the dance sequences.  I know they probably selected them to be comfortable for dancing, but those baggy pants were terrible and that jacket…  I like Hyun-joong with short hair, but his latest hair cut looks too ‘young business professional’ instead of ‘Hallyu Star.’  The choreography was also a miss for me and I really don’t see why you need dance sequences for this type of song.  With the skipping sequences in it, I wouldn’t be surprised if it was the same choreographer from SS501’s “Love Like This.”  Skipping movements by guys in an MV just does not equal sexy or smooth in an MV to me.

With Hyun-joong’s release, four out of the five members of SS501 have now released their solo efforts leaving only Kim Kyu-jong left.  Out of the four, I would have to say that Park Jung-min‘s comeback with his song “Not Alone” was the best.  Jung-min was probably my least favorite member, but I was really impressed with his song “Not Alone” which was a great solo effort.

The release of Hyun-joong’s solo album Break Down will be on June 8th after the kicking off his promotional activities on the 7th with a meeting with 4,000 lucky fans.  I’m sure there will also be some cake at the fan meet since Hyun-joong will celebrate his 25th birthday on the 6th.  I look forward to what else Hyun-joong has in store for us with Break Down, hopefully it only gets better.