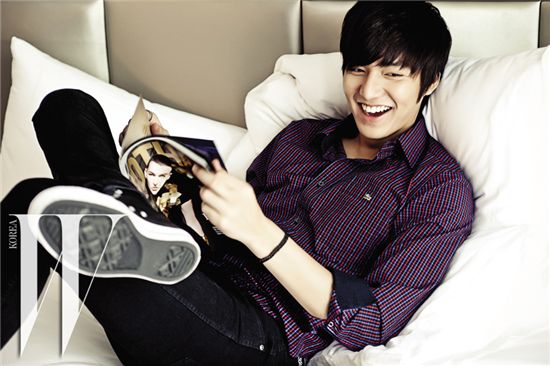 Lee Min-ho’s new action drama, City Hunter, is confirmed to hit TV screens in May 2011.  A representative from Starhaus Entertainment stated, “It has been confirmed that the first episode of City Hunter will air on May 25 next year.”

City Hunter,originally a Japanese manga series by Tsukasa Hojo, was set in Tokyo, Japan during the later half of the 1980s. The plot revolves around a Japanese private detective, Ryo Saeba, who works relentlessly to rid the city of crime and uphold justice.

In September, the show’s PR firm announced that the 23-year-old Boys Over Flowers star had been casted as the main lead in the Korean drama adaptation, which will take place in present-time Seoul. He will play Lee Yung-jong, a humane and charismatic investigator-cum-playboy who is helpless in front of beautiful women but is skillful and agile when solving cases for his gorgeous clients.

In fact, this is the first time the Japanese comic has been adapted into a drama since it was first published 13 years ago, despite the many offers from reputable production companies and famous actors. This was because the original author (mangaka) insisted on perfection and had many demands, making production hard to materialize. Yet Lee Min-ho managed to impress the mangaka with his manly, appealing, and fresh image.

City Hunter was initially planned to be released in March 2011. However, producers were forced to delay the premiere date due to problems with casting and the original script. The SBS staff denied rumors that they have stopped filming for the show, stating, ““The script is still being edited and improved, we also have to choose a good main actress. The drama has an excellent plot and the actors are very attractive, hence there is no reason for production to stop. We will take legal action against those who have made such false allegations.” They also revealed that Lee Min-ho’s international popularity is so great that endless inquiries are streaming in already.

Lee Min-ho’s last role was in March where he acted as an architect pretending to be homosexual in MBC‘s Personal Taste, opposite Korean actress Son Ye-jin. He has been receiving training to prepare himself for action scenes and firearms use in the show, as well as to understand the character better.

I can totally imagine Lee Min-ho in his character-I mean, hot, smart, righteous, fights crime, AND melts in front of chicks? I foresee that he’s going to stir up another storm. But till City Hunter premieres, we’ll just have to wait and see!